Attacks on religious communities ‘a wound on all humanity’: Trump tells UN 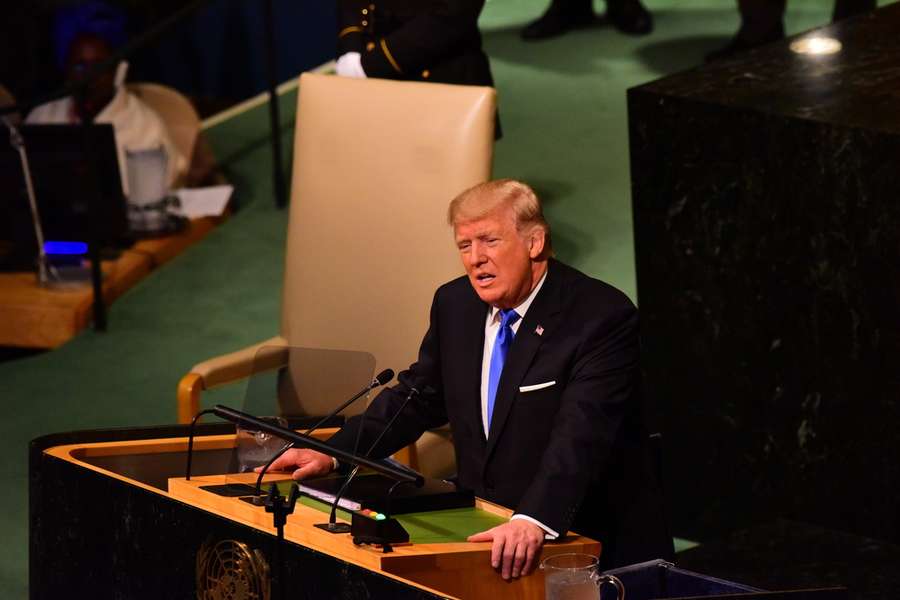 “Today, with one clear voice, the United States of America calls upon the nations of the world to end religious persecution,” President Trump said. “Stop the crimes against people of faith. Release prisoners of conscience. Repeal laws restricting freedom of religion and belief. Protect the vulnerable, the defenseless, and the oppressed.”

“We must do all we can to avoid religious cleansing of societies,” he said.

President Trump delivered his remarks as the UN General Assembly (UNGA) meets for its 74th session in New York City on Monday.

Praising the Global Call to Protect Religious Freedom, Trump claimed the event the first of its kind to be held at the UNGA. United States Ambassador-at-Large for International Religious Freedom Sam Brownbackagreed, saying that “to our knowledge” no such an event focusing on religious freedom had been held at the United Nations General Assembly by a member country before.

In July, the Pew Research Center released its 10th annual report on global religious restrictions. It found that global restrictions on religious freedom had intensified over the ten-year span from 2007 to 2017.

Pew numbers from 2018 said that 83% of the world’s population lived in countries with high or very high religious restrictions; populous countries such as India and China, which also restrict freedom of religion, contribute to this high number, the report said.

At the UN on Monday, Trump drew attention to the increased persecution of religious minorities around the world, including Christians.

“It is estimated that 11 Christians are killed every day,” Trump said. “I mean, just think of this: Eleven Christians a day, for following the teachings of Christ. Who would even think that’s possible in this day and age? Who would think it’s possible?”

The president cited numerous acts of religiously motivated violence, including the 2016 murder of Fr. Jacques Hamel by Islamic State terrorists in Normandy, France, as well as “horrifying” shootings at synagogues in Pittsburgh and in California in 2018 and 2019, respectively. Trump also referred to the March, 2019, shooting at a mosque in Christchurch, New Zealand, that “sadistically murdered” scores of Muslim worshippers, as well as the Easter bombings in Sri Lanka churches and hotels that killed more than 250 people earlier this year.

“These evil attacks are a wound on all humanity,” Trump said, noting that the U.S. will urge other countries to ramp up prosecution and punishment “of crimes against religious communities,” and to increase prevention of efforts to intentionally destroy religious sites and relics.

“Too often, people in positions of power preach diversity while silencing, shunning, or censoring the faithful,” President Trump stated. “True tolerance means respecting the right of all people to express their deeply held religious beliefs.”

Part of a day’s worth of events on religious freedom, Trump’s speech was followed immediately by UN Secretary-General Guterres, who emphasized the need for protection of religious communities that have existed for centuries or even millennia but which are also being targeted.

He mentioned Chaldean and Assyrian Christian and Yezidi communities in Iraq saying he “cannot accept that these communities that have been there for millennia will disappear from the region.”

“It is clear that these communities like the Yezidis, like many others, in this region as everywhere in the world, are a deeply rooted part of the society, and it is essential to preserve religious diversity in all parts of the world,” he said.

That statement said that “[t]he pluralism and the diversity of religions, colour, sex, race and language are willed by God in His wisdom, through which He created human beings.”

After Trump’s remarks, Secretary of State Mike Pompeo also addressed the religious freedom event, introducing survivors of religious persecution who would give their testimonies.

“The Bible says that ‘whatever is true, whatever is noble, whatever is right, whatever is pure, whatever is lovely, whatever is admirable—if anything is excellent or praiseworthy—think about such things,’” Pompeo said, quoting from the Epistle of St. Paul to the Philippians. “And that’s what we are all doing here today.”

Emilie Kao, director of the DeVos Center for Religion and Civil Society at the Heritage Foundation, highlighted the significance of such a “high-level” event at the UN with world leaders present.

Holding the event at the UNGA, which she called “probably the most high-profile global event of the year,” meant that the Global Call to Protect Religious Freedom was “putting religious freedom at the top of the agenda of the world stage.”

Present at the event were survivors of religious persecution in countries like Sudan, Iran, China, and Turkey.

“Those kinds of people—I cannot remember the last time they got a platform” this great, she said.  “To have them be confronting their abusers at the UNGA, that’s unprecedented.”

ADF International Director of Global Religious Freedom Kelsey Zorzi, who also serves as president of the United Nations’ NGO Committee on Freedom of Religion or Belief, said that “The president’s speech is an important and historic moment precisely because religious freedom is too often ignored or downplayed at the U.N.”