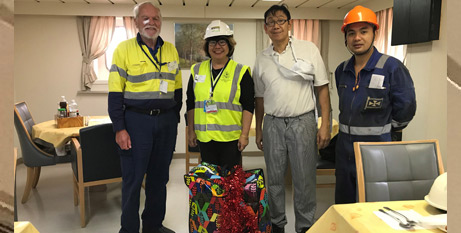 A visit from the Apostleship of the Sea ministry brought some early Christmas cheer for seafarers on three ships docked at Port Botany in Sydney. Source: ACBC Media Blog.

Seafarers on three ships docked at Port Botany received some early Christmas cheer as part of a planned visit from the Apostleship of the Sea ministry.

Roslyn Rajasingam, Apostleship of the Sea Australia’s national director, visited the ships along with Barry Cleary, a retired ship engineer and a volunteer ship visitor for AoS for the past five years in the Archdiocese of Sydney.

Ms Rajasingam said climbing on board the three ships was a special experience for her and was a wonderful highlight of her first year as national director of the AoS.

While on board, the pair distributed Christmas gift packs to seafarers, made possible by donations from businesses and organisations that support the chaplaincy services by AoS through its network of volunteer ship visitors, chaplains and Stella Maris Centres. Roslyn Rajasingam, national director of the Apostleship of the Sea

Ms Rajasingam said the seafarers greatly appreciated the visit and gift packs because their work is often very isolating, with some seafarers not seeing friends or family for eight months at a time.

“The first ship was a cargo ship manned by 17 Filipinos and four Eastern Europeans. We had morning tea there. The chef, Mario, toured me around the kitchen and their stores/fridges,” Ms Rajasingam said.

“The second ship was carrying chemicals and was manned wholly by Indians. We had Indian lunch there with a young seaman, Amar. The seafarers were very friendly.

“The third one was an oil tanker, again manned by Indians. We had coffee and juice there. It was their change of shift, so everyone was pretty busy.”

“What an eye-opening experience it was!”

With about one million seafarers on the world’s oceans at any time and 90 per cent of Australia’s trade reliant on shipping, Australia’s ports are key points to offer ministry and pastoral care.

Seafarers are confronted with very real threats and dangers to their lives and can suffer from high rates of suicide, depression and self-harm. Some common issues affecting seafarers include: exposure to piracy and criminal activity; poor working conditions; and isolation and distance from family while at sea.

The AoS cares for the spiritual, social and material welfare of all seafarers, whether they be on merchant, passenger, war or fishing vessels. The Church has always been interested in seafarers since Christ first gathered his fishermen-disciples around him, but the modern movement began in the 1890s.

For more information about the work of the AoS, go to: http://www.aos-australia.org/