YAOUNDÉ, Cameroon – A new report by the World Food Program says the spreading coronavirus could cause famine of ‘Biblical proportions’ in East Africa.

The UN agency estimates that some 20 million people are facing food insecurity across nine countries in the region: Burundi, Djibouti, Ethiopia, Eritrea, Kenya, Rwanda, Somalia and Uganda. That figure could increase to 43 million over the next three months.

But the situation could get even worse. 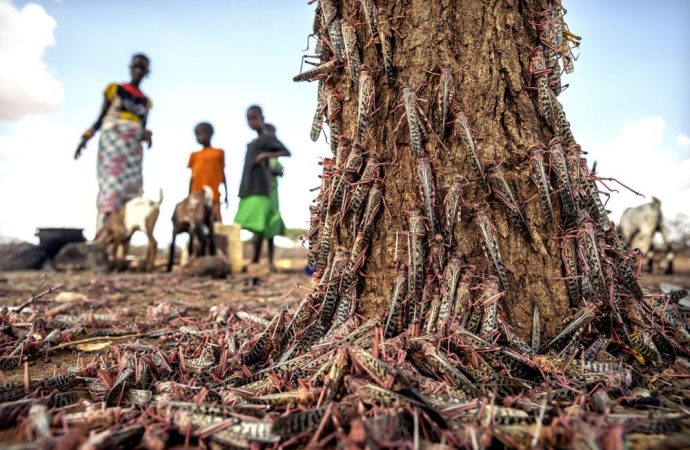 In this photo taken Tuesday, March 31, 2020, desert locusts swarm over a tree in Kipsing, near Oldonyiro, in Isiolo county, Kenya. Weeks before the coronavirus spread through much of the world, parts of Africa were already threatened by another kind of plague, the biggest locust outbreak some countries had seen in 70 years, and now the second wave of the voracious insects, some 20 times the size of the first, is arriving. (Credit: Sven Torfinn/FAO via AP.)

According to Catholic Relief Services (CRS), the international aid and development arm of the U.S. bishops, a possible desert locust invasion could further damage crops, thereby worsening the hunger crisis in the region.
Matt Davis, the CRS Regional Director for East Africa, urged that the coordination between agencies and governments is going to be more important than ever.

“Kenya, Ethiopia and other countries are responding as best they can, but the combination of these two simultaneous threats could take a massive toll on the people and economies,” he said.

Davis said CRS has close relationships with local Church and Caritas partners across East Africa, who are actually based in the areas where we work, no matter how remote, and whose staff are on the frontlines implementing a lot of the Catholic aid agencies programming.

READ ALSO:  Mourners pray for soul of Queen at funeral in Westminster Abbey

“Because they are a part of these communities, they are well placed to continue carrying out our work within the rules and regulations established by their respective governments,” he said.

Compared to other parts of the world, confirmed cases of the COVID-19 in East Africa are still relatively few.

“The relatively few cases of confirmed COVID-19 cases in East Africa is most likely a reflection of the lack of testing and challenges with contact tracing, said Davis.
“ In much of East Africa, the vast majority of people are employed by the informal sector, meaning day laborers who might get hired for a day or a week to work on a construction site or farm. When people can’t earn a regular income, or if a breadwinner loses a job or falls ill, that sparks a humanitarian situation where families end up needing cash transfers or food distributions in order to meet their immediate needs.

“Desert locusts represent an additional concern that threatens to worsen the hunger situation dramatically. We believe the locust invasion will continue through June-July with increasing damage, wiping out crops and harming livelihoods. Locust swarms repopulate every three months or so. They would have begun laying eggs from the first week of April onwards.”