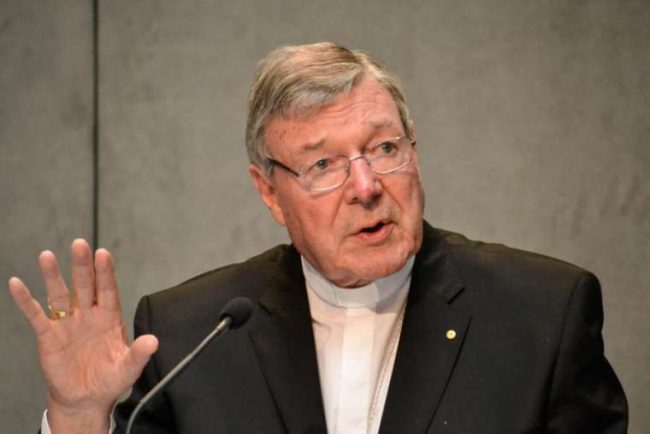 CNA Staff, Dec 21, 2020 / 04:47 pm (CNA) – Cardinal George Pell, who was acquitted this year after becoming the highest-ranking Catholic cleric ever to be convicted of sexual abuse, spoke this week about his time in prison, his hopes for the future, and his thoughts on Vatican financial reform efforts.

Pell was initially convicted in Australia in 2018 of multiple counts of sexual abuse. On April 7, 2020, Australia’s High Court overturned his six-year prison sentence. The High Court ruled that he should not have been found guilty of the charges and that the prosecution had not proven their case beyond a reasonable doubt.

Pell spent 13 months in solitary confinement, during which time he was not permitted to celebrate Mass.

The cardinal still faces a canonical investigation at the Congregation for the Doctrine of the Faith in Rome, though after his conviction was overturned, several canonical experts said it was unlikely he would actually face a Church trial.

In a new interview with EWTN, Pell said his time in jail was difficult, but he was strengthened by many people offering prayers and sacrifices for him.

“[O]ne of the great differences between us and people without religion is that we believe in some mysterious way suffering can be turned to good. So many people wrote to me and said me they were offering their suffering for me: a young fellow who was dying, a woman wrote and said she was about to give birth and she said would offer up the pains of childbirth for me,” he said in the December 9 interview.

“I felt I could offer up my suffering for the good of the Church, for the victims [of clerical sex abuse], for my family, for my friends, and that helped,” he continued.

“And it also helps to realize that ultimately there’s one judgement that’s supremely important and that’s before the good God when you die. Now if I had thought that death was the end of everything, that the ultimately important thing was my earthly reputation, well obviously my approach would have been different.”

Pell said that although he had faced animosity in his career, the type of infamy that comes with allegations of sex abuse are extremely challenging, especially when he had to remain silent in the face of unfair reporting.

Still, the cardinal said he never despaired during his time in prison, although losing his appeal at the Victoria Supreme Court “was a very low moment.”

“I knew rationally, that my case was enormously strong, but things are not decided on rationality and that Appeal court decision in Victoria reminded me of that,” he said.

“One of the interesting things in Rome was that even my ideological enemies didn’t believe that I was guilty,” he noted. “Now one reason for that was because they knew what a Cathedral is like after a big Mass on Sunday. Many of the people in Australia, even a few of those who were helping me, think of churches as being small and empty and nobody around. But in a cathedral on Sunday, we were, you know, there were hundreds in the big Mass, 50 in the choir, 15 servers, half a dozen people in the sacristy, plus the visitors. The suggestion that I would have attacked two youngsters I didn’t know, nobody said I knew them, in such circumstances, is doubly implausible.”

In Australia, however, he said some people treated him as a scapegoat, seeing not just him but the Catholic Church more broadly on trial for sex abuse.

Pell said his time in prison was somewhat like a retreat – removed from the world and isolated from social interaction.

While there were moments where he wondered why God was allowing his suffering, he also hopes that his ordeal can bring souls to Christianity.

Pell said he is not angry looking back at his experience, but is glad to be back in Rome to thank Pope Francis for his support.

Although he is no longer prefect of the Secretariat for the Economy, as his term expired last year, he said his successor, Jesuit priest Fr. Juan Antonio Guerrero Alves is “a good man, a competent man.”

“He’s headed in the right direction and I totally support him,” Pell said. “I just hope he’s not thwarted the way I am. The Holy Father says there’s got to be an investment committee set up to manage Vatican investment. We recommended that 5 years ago. Now that’s got to be men and women by honest and really professional investors and given effective control. That’s what my successor wants and I fully support that so that we can get away from this shadowy world that the Vatican has dealt with, not all always, but so many times, for decades.”

Reflecting on his own time heading the secretariat, Pell said he “didn’t quite realize just the level of sophistication, corruption, and a good measure of incompetence that would be there.”

During his time as prefect, he discovered more than 1 billion euro in accounts that had not been declared.

Pell addressed speculations that the sex abuse allegations against him were an attempt to prevent his anti-corruption work in Vatican finances. He said that while there is evidence to support this idea, there is not proof, and more investigation is needed.

Some of this speculation involves media reports that Cardinal Angelo Becciu sent 700,000 euros of Vatican funds to Australia during Pell’s sexual abuse trial, possibly as a payment for Pell’s accusers.

In September, Becciu resigned as prefect of the Vatican’s Congregation for the Causes of Saints and from the rights extended to members of the College of Cardinals.

He worked previously as the number two-ranking official in the Vatican’s Secretariat of State, and has been connected to an ongoing investigation of financial malfeasance at the secretariat. He had clashed with Pell over reform efforts in the Vatican.

CNA has reported that in 2015 Becciu seemed to have made an attempt to disguise the loans on Vatican balance sheets by canceling them out against the value of the property purchased in London. Senior officials at the Prefecture for the Economy said that when Pell began to demand details of the loans, Becciu called the cardinal in to the Secretariat of State for a “reprimand.”

In 2016, Becciu also canceled a planned external audit of all Vatican departments.

Asked about Becciu’s resignation, Pell said, “I hope the cleaning of the stables in both my state of Victoria and the Vatican continues.” He added that “Becciu has a right to a trial. Like everybody else, he has a right to due process. So let’s just see where we’ll go.”

Overall, Pell said he thinks the Church is doing a good job of helping sex abuse victims. He pointed to protocols aimed at prevention, reporting and investigation claims, and offering compensation and counseling to survivors.

“I think, for a long time, the Church has basically been heading in the right direction and this hasn’t been as sufficiently recognized,” he said.

Looking forward, the cardinal said he plans to write and speak, and added that “like every good Christian, I should try to prepare for a good death.”

A panel of experts has been convened to conduct a national review of the governance and management structures of Catholic dioceses and parishes. Read More