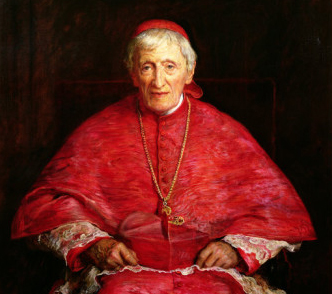 Vatican City, Oct 13, 2019 / 03:20 am (CNA) – Nearly two centuries ago, John Henry Newman was England’s most well-known Anglican priest, until he risked everything to become a Catholic. Today he has become a saint.

As Pope Francis named Cardinal John Henry Newman a saint Sunday, he told Catholics that the goal of life is a transforming encounter with Jesus.

“The ultimate goal is not health or wellness, but the encounter with Jesus … He alone frees us from evil and heals our hearts. Only an encounter with him can save, can make life full and beautiful,” Pope Francis said at the canonization Mass in St. Peter’s Square Oct. 13.

The canonization was attended by Prince Charles, heir to the British throne, along with delegates from the Church of England.

“Today we give thanks to the Lord for our new saints. They walked by faith and now we invoke their intercession,” he said.

Pope Francis read a quote from one of  Newman’s sermons describing the holiness of daily life: “The Christian has a deep, silent, hidden peace, which the world sees not… The Christian is cheerful, easy, kind, gentle, courteous, candid, unassuming; has no pretence… with so little that is unusual or striking in his bearing, that he may easily be taken at first sight for an ordinary man.”

Newman was a 19th-century theologian, poet, Catholic priest, and cardinal. Born in 1801, he was before his conversion a well-known and well-respected Oxford academic, Anglican preacher, and public intellectual. Newman’s 1845 conversion to the Catholic faith was controversial in England and resulted in the loss of many friends, including his own sister who never spoke to him again.

He became a priest in 1847 and founded the Oratory of St. Philip Neri in England. He was particularly dedicated to education, founding two schools for boys and the Catholic University of Ireland. His “Idea is a University” became a foundational text on Catholic higher education. He was a prolific author and letter writer. Newman died in Birmingham in 1890 at 89. “Let us ask to be … ‘kindly lights’ amid the encircling gloom. Jesus, ‘stay with me, and then I shall begin to shine as Thou shinest: so to shine as to be a light to others,’” Pope Francis said in his Oct. 13 homily, quoting parts of Newman’s “Meditations on Christian Doctrine.”

Mother Mariam Thresia (1876-1926) was an Indian mystic and founder of the Congregation of the Holy Family. The Syro-Malabar Catholic foundress received the stigmata and would sometimes levitate during prayer.

Giuseppina Vannini (1859-1911) religious sister from Rome known for founding the congregation of the Daughters of St. Camillus dedicated to serving the sick and suffering. Sister Dulce Lopes Pontes (1914-1992) founded the largest charitable organization in Brazil providing healthcare, welfare, and education service. Nominated twice for the Nobel Peace Prize, she is the first Brazilian-born female saint.

Pope Francis said that these three religious women saints show us that the consecrated life is “a journey of love at the existential peripheries of the world.”

“Saint Marguerite Bays, on the other hand, was a seamstress; she speaks to us of the power of simple prayer, enduring patience and silent self-giving,” the pope said. “That is how the Lord made the splendour of Easter radiate in her life.”

When Bays (1815-1879) was diagnosed with advanced cancer in 1853, she prayed to the Virgin Mary to be able to suffer with Jesus rather than to be healed. However, on the day that Bl. Pius IX proclaimed the Dogma of the Immaculate Conception, Sept. 8, 1854, she was miraculously healed.

“On the journey of life, purification takes place along the way, a way that is often uphill since it leads to the heights,” Pope Francis said.

“Faith calls for journey, a ‘going out’ from ourselves, and it can work wonders if we abandon our comforting certainties, if we leave our safe harbours and our cosy nests. Faith increases by giving, and grows by taking risks,” he said.

The canonizations took place as the Church celebrates an “Extraordinary Missionary Month” dedicated to prayer and reflection on the missionary work of the Church, as well as the Synod of Bishops on the Pan-Amazonian Region, taking place at the Vatican Oct. 6-27.

“The Lord sets our hearts free and heals them if only we ask him, only if we say to him: ‘Lord, I believe you can heal me. Dear Jesus, heal me from being caught up in myself. Free me from evil and fear,’” Pope Francis said at the canonization.

NEWER POSTMarathon man: The Catholic faith, and family, of Eliud Kipchoge
OLDER POSTProtecting the next Folau