Day one: Cardinal Pell’s appeal at the High Court

Cardinal George Pell’s final chance for freedom begins today at the High Court amongst enormous national and international attention. Catholic Voice Editor, Felicity de Fombelle is covering the proceedings and will provide updates throughout the day. Media filing reports outside the High Court this afternoon after the Cardinal Pell hearing concluded at 4.30pm. The case resumes tomorrow at 10am with the prosecution to present its arguments.
11 March 4.40pm: 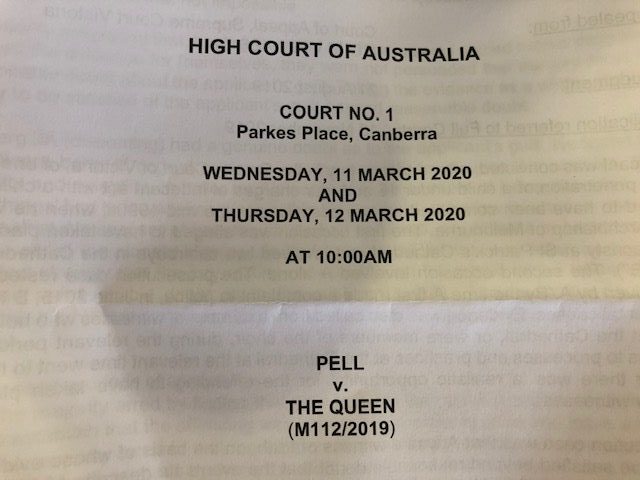 Mr Walker referred to the sacristy after the Sunday Solemn Mass where the alleged offending occurred.

“In fact, it was a hive of activity as service arrived at the end of the procession to clear away the holy vessels,” he said.  “It was inconsistent with the timing needed for the alleged offenses to have occurred making it improbable to the point of realistically impossible.”

Mr Walker stressed that “because a jury or indeed a judge believes a witness that does not mean the witness is telling the truth,” he said. “It may be that people we believe are wrong or they are simply lying.”

There was a long discussion about the credibility of the complainant as distinct from considering the whole of the evidence about guilt.

The evidence of the master of ceremonies at the time at St. Patrick’s Cathedral in Melbourne, Monsignor Charles Portelli was also discussed at length.

Mr Walker said the evidence of the Monsignor was utterly at odds with Cardinal Pell being elsewhere at the time and offending.

He said that the prosecution was “making events fit to serve their particular case,” and continually described their arguments as being “completely topsy turvy”.

Finally, Mr Walker said that the prosecution was seeking to make events fit because they did not have a strong case and therefore guilt could not have been found beyond a reasonable doubt.

The case resumes at 2:15 again with Mr Walker who has been given four hours to mount his arguments and after that, the hearing will move to the prosecution. Crowd gathers outside the High Court At the High Court, this morning as Cardinal George Pell launches his bid for freedom. A seven member full bench will listen to arguments during the two-day appeal. A small media pack has assembled outside the court with five TV crews and three print journalists. Surprisingly there is no one else around although the hearing does not begin until 10am.

Back-to-basics for family of five

Jack reads to Mum with Hannah and baby William looking on Mum-of-five Amber Maher had a meltdown with the pressure of home schooling. But while ... Read More