Meet our Church’s women in leadership 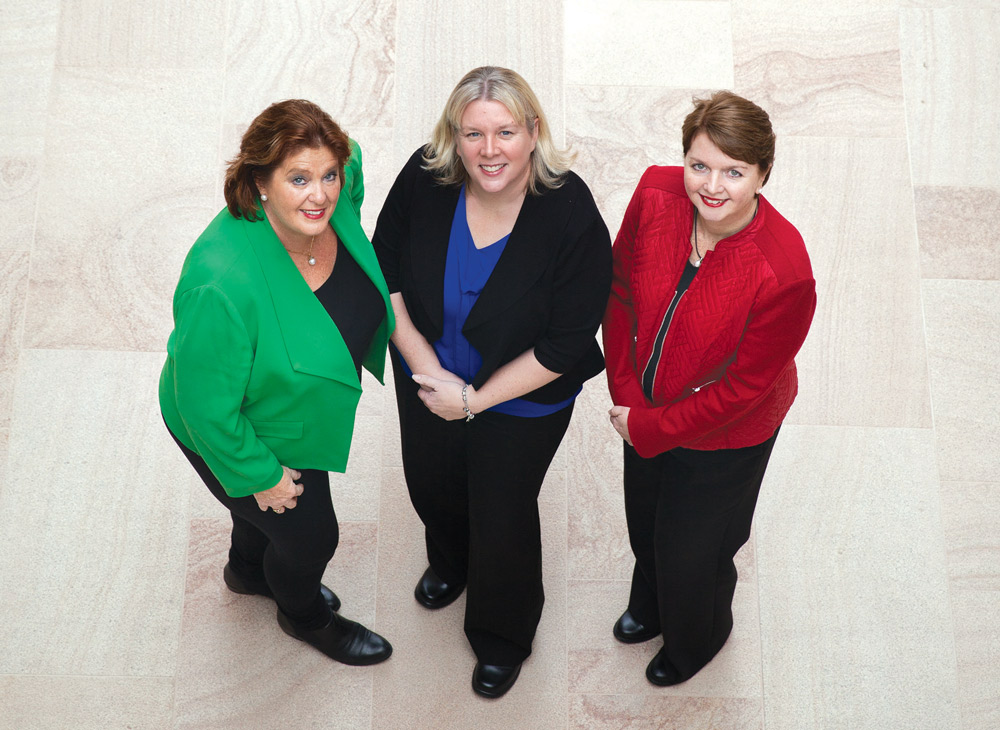 FIONA VAN DER PLAAT spoke with Helen Delahunty, Anne Kirwan and Camilla Rowland, three women who are at the forefront of decision-making in the Archdiocese. And she finds that there’s a lot more to life than work for each of them. AS far as role models go, Anne Kirwan would like to think she is a good one for her 10-year-old daughter. But Wonder Woman isn’t a bad support act.

“We’ve just seen Wonder Woman at the movies,” the CEO of CatholicCare in the Archdiocese says.

“I like to see female action-hero role models and it’s good for my daughter to see them too.”

Escaping to the movies is also one of the ways – along with cheering on her daughter’s netball team and “yelling and screaming” from the stands at the Canberra Raiders’ NRL games – Ms Kirwan gives herself a break from what is “not just a job, but a vocation”.

When she took over the leadership of CatholicCare nearly three years ago, having worked for the agency for 20 years, she felt the weight of responsibility.

On one hand, taking over at a time of great change, par­ticularly in the new world of the National Disability Insurance Scheme, was an exciting chance to do things differently and leave her stamp.

On the other hand, it was daunting. “It can be quite scary when you realise the buck stops with you,” she says.

“In the end, we are representing the Church and the Arch­diocese, and I am mindful of the legacy of 60 years.

“You want to leave any position in a better condition than what you inherited, and I think I’ve given it a red-hot go. It’s been a challenging time, but a rewarding one.”

Ms Kirwan is thankful for her “amazing” staff, about 80 per cent of whom are women, and that she can rely on them to look after the details while she has learned to step back and look at the bigger picture.

While she has had to relinquish much of her clinical caseload, she has found her psychology training and experience useful in running an agency that needs to be financially and politically savvy while maintaining its community focus.

“In a leadership role, I need to remain calm and steer the ship,” she says.

“I strive to be a role model for my staff – I think that’s quite a compliment if people can say that you’re a role model.

“At the same time, I see myself as quite a work in progress.” HELEN Delahunty freely admits if she had known what lay ahead when she accepted the job as Archdiocesan Financial Administrator in April 2011, things might have been different.

As it was, she was hesitant to even apply for it. She was “crook as a chook” in hospital at the time, had four busy sons to wrangle and enjoyed her work as chief financial officer with Greening Australia.

But her friend Francis Sullivan, later to become CEO of the Church’s Truth, Justice and Healing Council, encouraged her to go for it.

“I thought it was going to be a doddle,” she says. “Go to a few meetings, prepare a budget – I could do that in my sleep.”

She soon realised that “looking after the temporal goods of the Archdiocese” encompassed “just about everything”, from managing priests, property and staff to liaising with the parishes and overseeing the Manuka Precinct development.

And all this in the shadow of the Royal Commission into In­stitutional Responses to Child Sexual Abuse and other Church scandals. On top of that, her husband, leading trauma doctor Damian McMahon, died suddenly a year after she started.

But it’s turned out to be “the best job I’ve ever had”. “I love the people, I love the work, I love the Archdiocese,” she says.

The Manuka development has demanded more from her than she expected, but it’s been a fulfilling project.

“That building is my rock,” Ms Delahunty says, as she signs off on the construction and prepares to “get a community going there”.

The Manuka project exemplifies the beauty of her job. “I think what we do as an organisation makes a difference and I make a difference, and I couldn’t be prouder,” she says.

She has always felt supported in her role and being a woman has never been an issue.

Being a Catholic, while not necessary, has given her a deeper understanding of the people and the environment she works with, and Masses are the starting point of many meetings and gatherings.

Life might have “thrown stuff” at her in recent years, but Ms Delahunty says her pragmatism has helped her set priorities and cope with the demands of her job.

“I like to work hard but family always comes first,” she says.

She visits her grown boys in Melbourne as often as she can and loves to watch them play Australian football. She is a keen Collingwood supporter and a foundation member of the GWS Giants, whose games she attends regularly.

She has great friends, four of whom she solves the problems of the world with as they walk up Red Hill most mornings.

She is also a member of a book club, loves to ski and travel, and has finally managed to trim her committee commitments outside work down to one position.

As for her current role, Ms Delahunty feels she still has a lot to give and plans to stick around as long as she is wanted and needed. Camilla Rowland always thought she would become a social worker or psychologist.

The youngest of three sisters has a family member with a disability and was inspired by her parents’ dedication to creating better care options.

She eventually moved into social work, and into her role as head of Marymead in Canberra, but not before detour­ing through a human resources degree, which gave her an understanding of business and marketing that would serve her well in future roles.

After studying social work, she moved from Sydney’s northern suburbs to rural NSW and Queensland for 16 years, working in palliative and aged care, family services, and drug and alcohol programs.

Her work with the Sisters of Mercy during these years exposed Mrs Rowland, who is Anglican, to the “uniqueness of the Catholic voice”.

“That approach of community service underpinned by pastoral care, where you are looking at the person as a whole, really resonated with me,” she says.

It was fitting, then, that she wound up as head of a Catholic agency two years ago.

“I came with a lot of respect for what has been achieved by the Catholic Church, especially the investment it has made in the community,” Mrs Rowland says.

Being a non-Catholic has had it benefits. “I am not ham­pered by any preconceived ideas about what positions people hold. I just treat everyone the same.”

She took over at a time of change for Marymead, which marks 50 years in Canberra this year.

The organisation has moved into autism care and has de­veloped its mental health services for young people.

It has also set up co-location arrangements with Catholic­Care and the St Vincent de Paul Society in some rural areas.

At the same time, though, it has lost its foster care work, in which it has “a long, solid history”.

It is also adjusting to the National Disability Insurance Scheme and the government move away from block grants to individual funding, which Mrs Rowland says poses issues for community services.

The challenges don’t faze her, however. “I am known as a bit of a change agent. I’ve always been passionate about ensuring services meet community need.”

Mrs Rowland’s interest in building communities also domi­nates her limited spare time. “Some people cook as a hobby – I join committees. Social policy and good strategy are passions of mine,” she says.

She has the support of her family in this. Husband Duncan, who works in animal health, is community orientated – “he’s always the first person to help move things and dig things”.

And her two young-adult daughters, Rebecca and Alexan­dra, who went through Catholic schools in Canberra, “have a really good sense of social justice”.

Mrs Rowland likes to walk and do an occasional gym work­out to keep fit, and loves to read, especially investigative books and whodunnits.

Staying busy is what makes her happiest, though. “When I retire, I see myself contributing to the community, on com­mittees or volunteering,” she says. “Actually, I don’t think I will ever retire as such.”

NEWER POSTWalking together: a bright future for our Aboriginal and Torres Strait Islander children
OLDER POSTLosing myself to find myself