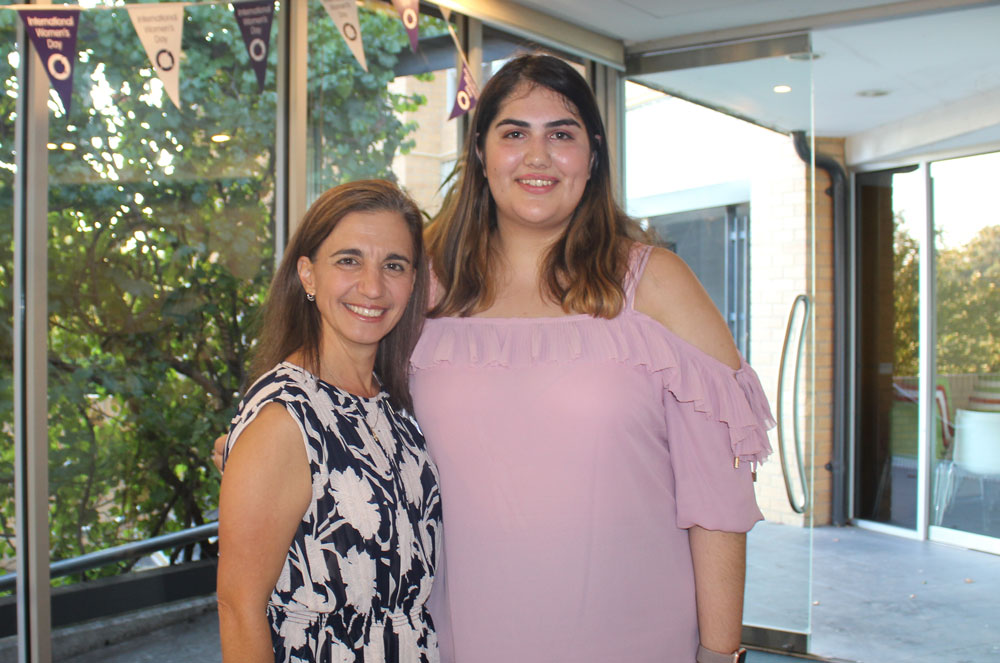 Loretta Wholley Principal with Caitlin Figueiredo – changing the world from the ground up. Photo: supplied.

Celebrated on March 8, the day marks a call to action for accelerating gender parity. The theme for this year was #BalanceforBetter and to support this special occasion, the Merici community received a white lapel ribbon representing the College’s symbol for the year, the white lily/fleur de lis to wear with pride, as well as hosting an IWB Strength as Women cocktail party.

At 20 years old, Caitlin was named one of Australia’s 100 Most Influential Women and an Obama White House Changemaker for Gender Equality by the President and Michelle Obama.

Caitlin represents 4.3 million young Australians as a Board Director of the Australian Youth Affairs Coalition, and in partnership with UN Women founded Jasiri Australia, a youth led movement on a mission to build a generation of fearless women with the skills, support, and resilience to lead change. Caitlin was included on the Forbes 30 Under 30 list for organising the world’s largest Girls Takeover Parliament Program with the Federal Parliament to promote democracy and increase female representation.

Most recently Caitlin was named ACT Young Woman of the Year and a 2018 Queen’s Young Leader.

Caitlin spoke about the idea of structural change vs individual change and what it takes to change the world and what makes the people who do.

“Structurally the problems we’re dealing with are undoubtedly pervasive and insidious in nature, but our solutions do not have to be that complex,” she said.

“Every day, I get to work in the best jobs in the world – jobs where the decisions I make – make a difference to millions of women and girls around the world – most of whom I’ll never know. But I’m able to do this because I was just one individual who saw a problem and was fearless enough to try and have a go. But I’m only one individual. I’ll never know the full impact I’m having on other people’s lives. I’m just like all of you. The same applies to you. You all have an incredible capacity to change the world around you.

“We just have to be fearless enough to try.“ In 2018 Caitlin found herself working at the United Nations in New York around the same time as the ‘March for our Lives’ anti-gun rally, a movement created by a group of teenage survivors of gun violence.

“I decided to go to the rally and as I walked down the blistering cold streets, past the White House towards the Capital, it dawned on me, that right here and now, this moment will change the world. There is a quote that I really like, “There are decades where nothing happens and there are weeks when decades happen. We are living in the latter, in weeks when decades happen.”

Caitlin believes that our interconnectedness is significantly speeding up change. What used to take activists decades to solve problems and raise awareness, for us, it can happen instantly because the world is consistently changing. “But it’s not happening fast enough.

We’re still facing the same structural issues women for centuries have faced. Instead of looking towards our leaders to change the world, I’ve learnt that the most powerful movements start by individuals asking themselves: How are we making change in our own lives? How can we show up to change the lives of the people in our community?”

Her commitment to gender equality led Caitlin to establish Jasiri Australia (fearless and brave) and the Girls Takeover Parliament program.

“Training, connecting and amplifying a diverse cohort of young women and non-binary people from all backgrounds to takeover parliamentarians’ positions from local legislators all the way up to the Prime Minister to give them an opportunity to influence legislation, and write speeches and motions on issues around gender equality.

“The program has been running for two years now, collectively, the participants have worked on motions and legislative change that have impacted over 1 million people. It’s been so successful, a simple program starting out from Canberra, has exploded and is now running in the Pacific Region by local young leaders who are using the program to work to ban single use plastic.”

Caitlin continues to receive the recognition she so richly deserves and in 2018 Caitlin was named ACT Young Woman of the Year and a 2018 Queen’s Young Leader which recognises and celebrates exceptional people aged 18-29 from across the Commonwealth, who are taking the lead in their communities and using their skills to transform lives.

Caitlin concluded her presentation by outlining her three tips for changing the world. “First, start discussing the issues and become better listeners. We cannot overcome what we ignore. And we cannot hope to solve that of which we do not understand. Widen your circles. Listen and seek to understand the oppressions of minority communities. Invite them to the table. Carve out a space.

The more we talk about things, the easier it is for us to see how all the issues are connected. Second, start on the individual level – start local, like our Girls Takeover Parliament program; and lastly, the problems we are looking at are complex, but the solutions do not have to be. You all have an incredible capacity to change the world around you. We just have to be fearless enough to try.”

The community thanked Caitlin for her inspiring presentation and we look forward to hearing much more from Caitlin and her accomplishments in the future.

We would like to thank our parents, students, staff and community members for supporting our event. Special thanks and appreciation are extended to our Year 11 Hospitality staff and students for preparing delicious canapes.