Archbishop Christopher recently met with a group of representatives from several Canberra parishes to consider the growing interest in Pope Francis’ encyclical Laudato Si – On Care for Our Common Home.

The Archbishop invited the group to propose a way forward to reflect and respond further to the Pope’s teachings during the special anniversary year announced by the Vatican back in May.

The meeting acknowledged the particular interest outside Canberra to Care for Our Common Home, given the unprecedented drought, bushfire, and biodiversity losses.

Parishioners spoke of personal experiences and stories of the Spirit moving them to draw from the depth of the “Gospel of Creation” as outlined in the encyclical.

Professor Knox Peden, a parishioner from St Joseph’s, O’Connor described his conversion experience as being deeply inspired by Pope’s “perspective” regarding the climate crisis and his teaching in general 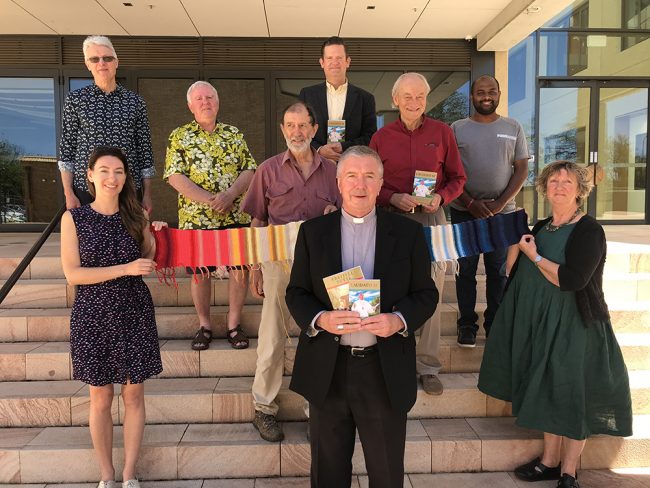 Vikki McDonough from Parish of the Transfiguration, North Woden, told her family’s experiences during last summer’s bushfires. Vikki showed the group a long handmade scarf comprising many colours, showing the pace of greenhouse warming over the previous 100 years. Her own life story began at a time of mild temperatures- light blue thread – contrasting with that of her grandson’s arrival during some of the hottest years now being experienced -red thread).

Archbishop Christopher noted that the breadth of Pope Francis’ worldview and the depth of his teachings was very evident during visits by the Australian Bishops to Rome. And the needs presented by his fellow Bishops in our region of Oceania were particularly pressing.

Jesus, I trust in you

We are celebrating Easter with an uninvited guest: the coronavirus.  Don’t we all know it! Jesus is with us in all this mess. He too ... Read More