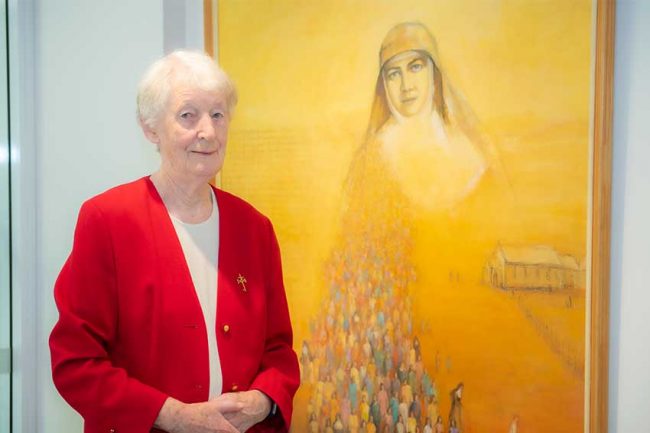 Sister Maria Casey rsj still pinches herself when she thinks of the privilege she received as a postulator of the Cause for canonisation of Mary MacKillop. PHOTO: Giovanni Portelli

AUSTRALIA celebrates the tenth anniversary of the canonisation of St. Mary of the Cross (MacKillop) this year. The first Australian saint, Mary was known for encapsulating the values and spirit of Australians in her maxim: “Never see a need without doing something about it.” In Rome, an event co-hosted by the Australian and U.K Embassies to the Holy See, remembered St. Mary earlier this week.
CathNews

CARDINAL Pell’s Prison Journal, Vol. 1 has been published this week, just seven months after the High Court’s unanimous 7:0 decision to throw out his conviction on abuse charges. The Journal records the thoughts, prayers and inner life of the innocent Cardinal as he begins what in the end were to be over 400 days in solitary confinement. Two more volumes of the Journal are to be released next year.
Catholic Weekly

POPE Francis has proclaimed 2021 will be “The Year of St Joseph” in his latest apostolic letter. The announcement came on the Solemnity of the Immaculate Conception, which marked 150 years since Pope Pius IX declared St Joseph the universal Church’s patron. Pope Francis said Christians could discover in St Joseph “an intercessor, a support and a guide in times of trouble.”
Catholic Leader

MELBOURNE Archbishop Peter Comensoli has warned against an extreme draft law to ban gay conversion practices in Victoria. The archbishop said the bill could limit Victorians’ ability “to express a view, share their faith, or talk about biblical teaching without fear of state interference” and has called for public discussion on these issues before the bill is advanced through parliament.
Catholic Weekly

A quarter of a million Catholic school students back in class