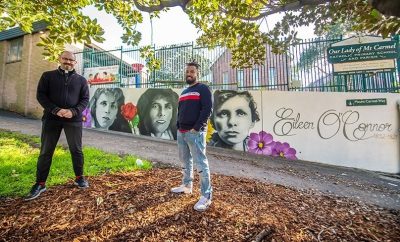 A SITE which played an influential role in the faith formation of Australia’s saint-in-the-making Eileen O’Connor now has a memorial to honour her and raise public awareness around her cause. Sydney City South parish priest Fr Paul Smithers commissioned local artist Danny Mulyono to paint a mural on the grounds of Our Lady of Mount Carmel primary school in Waterloo to honour Eileen on the site where she attended school and Sunday Mass with her family in the early 1900s. Eileen co-founded Our Lady’s Nurses for the Poor in 1913, a religious order committed to nursing the sick and poor in their homes.

A NEW online series to support Sydney Archdiocese lay leaders in parish renewal will blend the Church’s timeless wisdom with hands-on experience of engaging people on the margins and growing communities of hope and outreach. Fr David Braithwaite SJ (above) Asia Coordinator of Pope Francis’s Worldwide Prayer Network, will lead the four-week ‘Christ-centred Leadership’ series. Fr Braithwaite said the series would be concise and practical and would offer his experience of blending entrepreneurship, evangelisation and leadership formation.

A BRISBANE Catholic boys school has shown its strong commitment to safeguarding by inviting Australian-of-the-Year Grace Tame as a guest speaker. Iona College will host Ms Tame, 26, an advocate for survivors of sexual assault at a free community event. As a Year-10 student attending an exclusive all-girls school in Tasmania, she was repeatedly raped by her 58-year-old maths teacher. A decade later, after overcoming many personal and legal hurdles, Ms Tame now sees her work normalising conversations around sexual assault.

BRISBANE Archdiocese is one of more than 30 Catholic entities across Australia to produce landmark statements on efforts to curb modern slavery. The statements form part of new reporting required by the Australian government for any organisation with an annual revenue of over $100 million to document its efforts to ensure supply chains are slavery-free. Brisbane archdiocese contributes $2.5 billion to the economy through education and social services.