Pope Francis meets actor who plays Jesus in ‘The Chosen’ 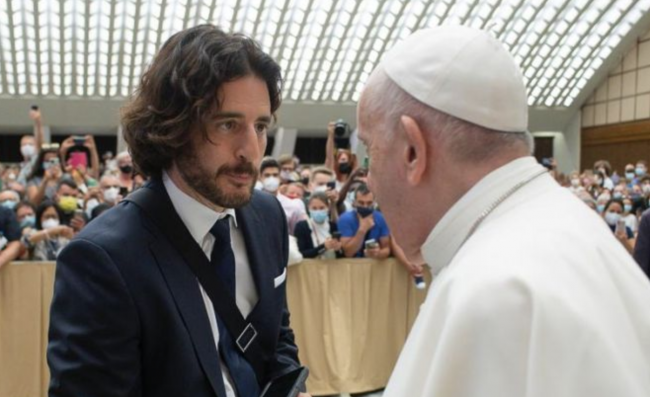 The actor who plays Jesus in the internet series “The Chosen” met Pope Francis on Wednesday, fulfilling a lifelong dream as he visits Rome this week to view pilgrimage sites related to the Gospels.

Jonathan Roumie, a Catholic who since 2019 has brought Christ to the screen for the evangelical Christian-produced series, told CNA that meeting the pope was “a childhood dream realized.”

“From the time I was a kid, I always wanted to meet the pope and go to World Youth Day, and I never knew how to do that. My parents were immigrants, so that wasn’t something that they knew about,” Roumie said after meeting the pope on Aug. 11.

The actor addressed the pope in Spanish and asked Francis to pray for him as he continues to portray Jesus in the internet series.

“His eyes kind of lit up when I said that,” the actor said.

Dallas Jenkins, the director of “The Chosen,” also met Pope Francis at the end of the pope’s general audience in Vatican City’s Paul VI Hall.

Jenkins, an evangelical Christian, said that the experience was “less of a personal thing,” but that the audience was really interesting.

“When I met him, I said, ‘I’m a Protestant, but I’m making a show about Jesus that people of all faiths appreciate,’” Jenkins said.

The pope’s response caught him by surprise.

“I really loved his sense of humor, and he just has a very sweet nature about him. So for me, I appreciate all that even if I don’t relate to the formality of it,” Jenkins said.

Roumie also made an additional pilgrimage to St. Padre Pio’s tomb in the Italian town of San Giovanni Rotondo, a four-hour drive away from Rome.

He said that he has had a personal devotion to St. Padre Pio for several years that deepened during the pandemic as he prayed with others via live stream on social media.

“Last year, I started praying online, live Divine Mercy Chaplet at the start of the pandemic. … That went on for 40 days, and in that time, somebody sent me a book of prayers,” he said.

St. Padre Pio’s “Stay with me” prayer was included in that book of prayers, and Roumie said that he was so moved praying it out loud for the first time via live stream that he could barely get through it.

Through his role in “The Chosen,” Roumie said that he has tried to consider “how might Christ have experienced joy, happiness, sadness, anger, and solitude.”

For him, he says the challenge is, “how can I experience the most ostensible traits of God love, mercy and compassion? How can I extend that to people in the scene?”

The first season of “The Chosen” focused on the initial meetings between Jesus and his first disciples, including Simon Peter, Matthew, and Mary Magdalene. The second season’s initial episodes address Jesus’ growing fame and conclude with the Sermon on the Mount. The production team is currently preparing for the third season of filming for what they hope to be a seven-season series.

“The Chosen” series is available for free through an app for iOS or Android systems, or through the website of VidAngel, its distributor.

Through its streaming app, which offers the show more than 50 language options, the series has built up a global audience.

The drought hangs on and bushfires rage while a sluggish economy discourages enterprise. Little wonder if the young lose confidence in the future and the ... Read More

NEWER POSTACT lockdown, day one: how are we coping?
OLDER POSTNational Briefs