Sleeping St. Joseph How this snoozing icon rose to popularity. 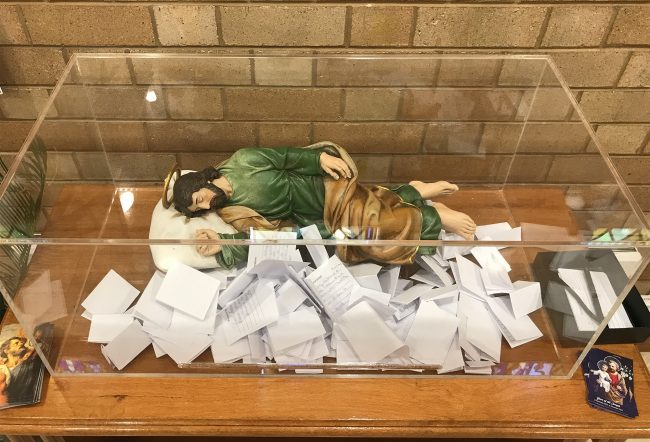 Most icons and statues of saints are, well, rather stiff. They are typically a bust or image of the saint standing still, maybe smiling slightly or gazing serenely into the distance, hands folded or holding something of significance.

But six years ago, during his trip to the Philippines, Pope Francis popularized a more life-like saint statue: that of St. Joseph, lying on his side, fast asleep.

“I like St. Joseph very much. He’s a strong man of silence. On my desk, I have an image of St. Joseph sleeping. Even when he is asleep, he looks after the Church. Yes! We know that he can do that,” Pope Francis said during an address in the Philippines on Jan. 16, 2015. “So when I have a problem, a difficulty, I write a little note, and I put it underneath St. Joseph, so that he can dream about it! In other words, I tell him: Pray for this problem!” he added.

After this address, the statues of “Sleeping St. Joseph” saw an explosion in popularity.

Isa Huerta said she was given a statue of the sleeping St. Joseph by her mother. Huerta said she had been drawn to the icon before she knew of Pope Francis’ devotion to it, though she said that increased her appreciation for it. Pope Francis shows the sleeping posture of the statue of St. Joseph he keeps on his desk while giving a talk during a meeting with families in Manila, Philippines, in this 2015 file photo. (CNS/Paul Haring)

She said she liked the icon because it reminded her of the passages in the Bible about St. Joseph’s dreams and the Holy Family’s flight to Egypt. “It reminds you that St. Joseph was human and got tired, too,” Huerta said. “This makes me appreciate the work he did for Mary and Jesus all the more. It’s a vulnerable position, but it’s cool that this is when God chose to speak to him.”

In his 2015 address in the Philippines, Francis said that the way St. Joseph responded to the dreams — by rising and doing as God had asked — shows that he was a man who was willing to do the will of God immediately: “Those precious moments of repose, of resting with the Lord in prayer, are moments we might wish to prolong. But like St. Joseph, once we have heard God’s voice, we must rise from our slumber; we must get up and act.”

A Prayer to Sleeping St. Joseph

O St. Joseph, you are a man greatly favored by the Most High. The angel of the Lord appeared to you in dreams, while you slept, to warn you and guide you as you cared for the Holy Family. You were both silent and strong, a loyal and courageous protector.

Dear St. Joseph, as you rest in the Lord, confident of his absolute power and goodness, look upon me. Please take my need (mention your request) into your heart, dream of it, and present it to your Son. Help me then, good St. Joseph, to hear the voice of God, to arise, and act with love. I praise and thank God with joy. St. Joseph, I love you. Amen.

This was St Clare’s sixth trip to the Pacific Island of Fiji but the first to span 10 days and include a home-stay in the ... Read More

NEWER POSTCOVID Closeness: The Third Glorious Mystery
OLDER POST‘How to be a better Dad’, advice from my children