The normal routine for priests has gone 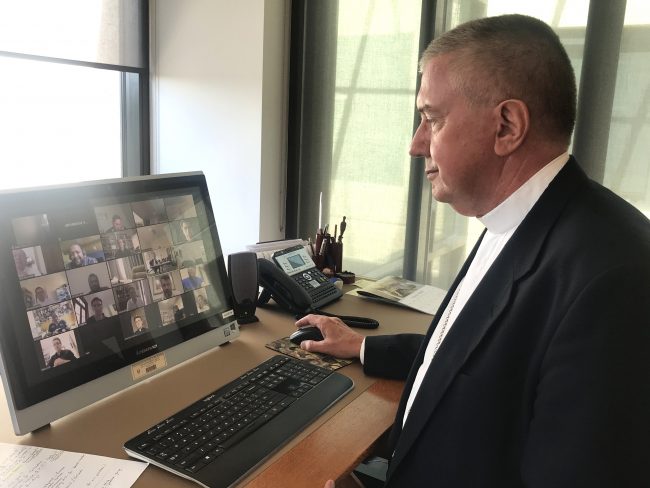 THE normal routine for priests has gone so clergy need to think differently about how they connect with their communities, Archbishop Christopher told a meeting of priests today.

The Archbishop used a “Zoom” online meeting with his 41 priests to thank and encourage them for their pastoral work at such a challenging time.

“Last Sunday morning was the first time ever that I’ve woken up as a priest and had nothing to do,” the Archbishop said.

“The churches are shut and there are no public Masses and our normal routine has gone.  This is something new for us and we need to work out new routines as priests.”

The Archdiocese showed great courage and resilience during the January bushfires and enduring the drought, Archbishop Christopher said, and now we are confronted with a different crisis.

“We saw the remarkable capacity of local parish communities to step up in the moment of crisis and I am so proud of the way we did that,” he told the priests.

“I really want to thank you for everything you are doing and encourage you at this most unbelievable time in our history to use all the pastoral imagination you can to be with your communities.”

Addressing the 41 priests who joined the online meeting from their parish offices and homes, the Archbishop also:

“We are becoming an ‘e-church’ in this Archdiocese with everything online,” he said.

“It is a bit like the catacombs in the early church.

“Families and households have become quasi-monastic communities, they have taken on that feel.

“For the church it is not so much loneliness but we talk about solitude and how do we encounter the Lord in that solitude?”

He told the priests that he was deeply moved by a homily that Pope Francis gave last Friday in which he said: “You are calling on us to seize this time of trial as a time of choosing.

“It is not a time of your judgement, but of our judgement: a time to choose what matters and what passes away, a time to separate what is necessary from what is not.

“It is a time to get our lives back on track with regard to you, Lord, and to others.”

Denis the Archivist, hidden away like his historical gems

If you set out to find Archdiocesan Archivist Denis Connor, you’d have your work cut out for you. Even if you knew he worked at ... Read More