Visiting priest recounts 18 months as a captive of terrorists 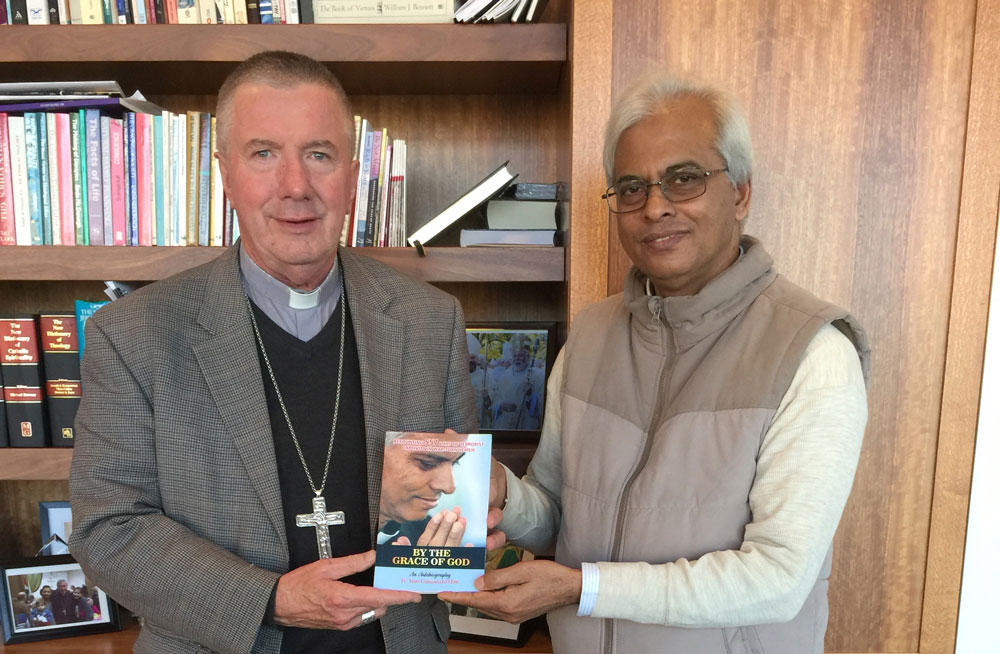 Fr Tom Uzhunnalil has a story to tell, and it’s as harrowing as it is inspiring.

Fr Tom was in Canberra recently to share his extraordinary story of having survived 18 months as a captive or terrorists.

On the morning of March 4 in 2016, while serving as a priest in Yemen, assisting Mother Teresa’s Sisters who were taking care of the sick and elderly, Fr Tom had just finished his morning prayers when he heard gunshots.

The gunshots were from terrorists who came for Fr Tom, forced him into the boot of a car and killed the Sisters he was working with. It was the start of an ordeal that he survived through the Grace of God, and the power of prayer.

Archbishop Christopher Prowse welcomed Fr Tom to Australia as he visited some of the cities to share his experience.

“This is my first visit to Australia, and I’m very grateful for your worship’s invitation and, more than all, for the prayers, of you in person, and the prayers of the faithful in all of the churches of the world,” Fr Tom said.

“That’s what brought me here. I thank the Lord and in the Lord’s name, thank each one of you in this Archdiocese and all of the faithful.”

Fr Tom shared his incredible story with members of the Archdiocese at Haydon Hall on Tuesday, June 18, a shortened version of which he shared on video afterwards.

“I went to Yemen in 2010 to be of service to the Mother Theresa Sisters who are serving the elderly people in Yemen,” he said.

“She began on the invitation of the government and her insistence made us pleased to reach there.”

“On March 4, 2016, during the war in Yemen, which is still continuing, the bad people … the so-called terror groups… we do not know which group exactly… one of these groups came into the home for the aged there and killed 16 people.

“They caught me first, made me sit, in front of me I saw the sisters die and a few others.

“They took me in the trunk of a car and then a long one and a half years stay.

“They shifted several times and they also took video of me requesting help from the Holy Father Pope Francis, Bishop Paul of Abu Dhabi, under whom I was working, and the Indian government authorities to help me and save me and things like that. I was told to say thanks for the prayers and the efforts of everyone, I’m free here, fully alive, wonderfully fine in body and soul and mind.

“So thanks to the Lord, and Our Lord is our living God who has hears prayers and will continue to hear our prayers, I am alive.”

Fr Tom said that prayer is the best weapon given to the faithful by the Lord, which he lets us use for all our needs and against our enemies.

“The Lord Jesus has said forgive your enemy and pray for them. He himself has shown us that example while praying for those who were nailing him to the cross to the heavenly Father,” Fr Tom said.

“So we too will have our own crosses and follow after him. But he is there, to help us, to support us. He said `come to me all you who are weary and tired, I will give you comfort, I will give you rest.’ This was the experience for me in this captivity.

“It is the fruit of the prayers of everyone that I am here and I bare this testimony… that our Lord is God, he’s alive and welcoming you to hear he is here and will answer our prayers in good time, which is the best for us and for the whole world.”

HONOLULU, HAWAII: Hawaii's law legalizing assisted suicide went into effect last week, but many physicians and pharmacists are choosing not to prescribe or dispense the ... Read More

NEWER POSTShare a meal, share a story for Refugee Week
OLDER POSTArchbishop celebrates the Feast of Corpus Christi in Rome