What are you willing to die for, Chaput asks students 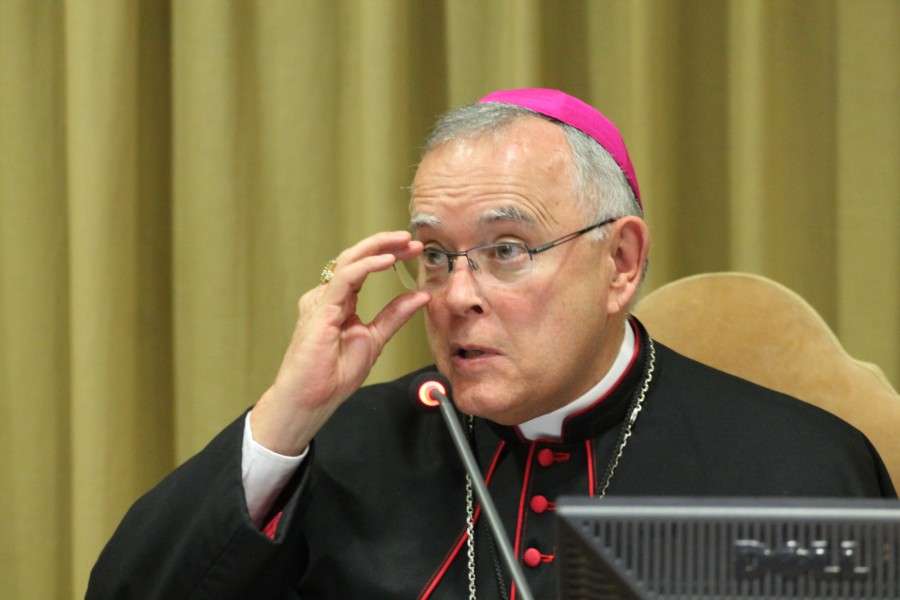 Washington D.C., Oct 14, 2019 / 10:30 am (CNA) – It is important to consider what we are willing to die for, Archbishop Charles Chaput reminded students and faculty in a speech at the University of Notre Dame on Friday.

“It’s a good thing, a vital thing, to consider what we’re willing to die for,” Chaput said in a lecture given to the Constitutional Studies Program at the university on Oct. 11.

“To even ask that question is an act of rebellion against a loveless age. And to answer it with conviction is to become a revolutionary; the kind of loving revolutionary who will survive and resist—and someday redeem a late modern West that can no longer imagine anything worth dying for, and thus, in the long run, anything worth living for.”

Chaput said he was moved to consider the question as he prepares for retirement; he turned 75 last month, and in line with canon law submitted his resignation to Pope Francis.

“When you get to be my age, a topic like ‘things worth dying for’ has some special urgency,” Chaput said, noting that he expected this to be his last speech delivered as a sitting archbishop. He told his audience that to consider that life, death, and meaning are all bound together in love.

Parents, the archbishop said, were the first example of natural love. Offering the example of the parents who shielded their child with their own bodies during the El Paso shooting in August, Chaput said that all parenthood requires a sacrifice of love, and that motherhood itself is an act of mortal risk.

But, he warned, “as religious belief recedes, and communities of faith decline, the individualism at the heart of the American experiment becomes more selfish, more belligerent, and more corrosive. It breaks down family bonds. It tempts parents to treat their children as accomplishments, or as ornaments, or—even worse—as burdens.”

“It also weakens the ties between grown children and their parents, who as they age can often become dependent. It’s a useful experiment for some of you who are here today as students to consider what you’d really be willing to give up for the sake of caring long-term for a mother or father.”

Citing the works of Tolkien, Chaput also pointed out that we are becoming effective strangers to the true understanding of friendship.

“Friendship is generally a milder form of love than family, and the notion of dying for a friend might seem remote. But someone rather famous once said that ‘Greater love has no man than this, that a man lay down his life for his friends.’”

History, Chaput said, is built on and by the examples of soldiers who died for their friends, or put themselves in harm’s way to shield others.

“All true friendship requires a readiness to die” the archbishop said, “if not literally, then in the sense of dying to ourselves; dying to our impatience and our reluctance to make sacrifices for others.”

“Pope Francis often talks about accompaniment as a key to Christian discipleship. The willingness to be with our friends when they’re not easily lovable, to accompany them in their neediness or to share in their suffering—this is the test of true friendship.”

The archbishop went on to discuss the love of honor, something often now held to be an anachronism, but which is really the love of personal integrity in the service of higher truths. Drawing a line from classical examples of honor in the Iliad, through to the life and work of St. Paul, to the fight to maintain personal dignity under the Soviet regime in the works of Alexander Solzhenitsyn, Chaput said love of honor provides the essential inspiration for personal, sometimes total sacrifice for the true and the good.

“As St. Paul warns us, the principalities and powers of this world always seek to control our lives. Evil is real, even when it’s masked in pleasant forms and excellent marketing. Therefore, it’s always important to honor our deepest convictions. And doing so can be costly.”

“We’re living in a moment of vigilant, even vindictive, political correctness on matters ranging from sex to the meaning of our national history,” said Chaput. “And our politics often seems gripped with amnesia about the price in human suffering extracted by the bitter social experiments of the last century—always in the name of progress and equality.”

Love and honor and sacrifice in the face of attack, Chaput said, needs to be tempered with prudence, and are not a rationale for self-destruction. Drawing on the examples of the early saints, Chaput said that the martyrs, like Polycarp, did not seek confrontation or death, and avoided both when they could, but without compromise.

“Silence and avoiding situations that force us to state our convictions can sometimes be the prudent course of action,” Chaput said. “The key word in that sentence is ‘sometimes.’ Cowardice is very good at hiding behind a number of virtues. Too often we censor or contort ourselves to fit into what we perceive as approved behavior or thought. We muffle our Christian beliefs to avoid being the targets of contempt. Over time, a legitimate exercise of prudence can very easily become a degrading habit; a habit that soils the soul.”

“Jesus urges us to love our neighbor as ourselves. The self-love proper for a Christian includes the love of personal honor, the kind that comes from living with integrity in a world that would have us betray our convictions.”

Chaput closed by warning that believers can expect “a rough road in the years ahead” in the coming years.

“There can be no concordat between the Christian understanding of human dignity and sexuality, and the contempt directed at our beliefs by important elements of our culture,” he said.

“This is very likely my last talk as a serving archbishop. But the Church, her mission, and the Christian story go on. And the greatest blessing I can wish, for each of you, is that you take up your part in the tale with all the energy and passion in your heart. Because it’s a life worth living.”

What are you giving up for Lent? The answer can be frivolous but many Catholics give up something serious to remember Christ’s sacrifice. Here, several ... Read More