Who are our Plenary Archdiocesan members? In the lead-up to Australia’s Fifth Plenary Council, the Catholic Voice sought the views of some of our Archdiocesan members. Here they discuss their Plenary journey, their reflections, and expectations. 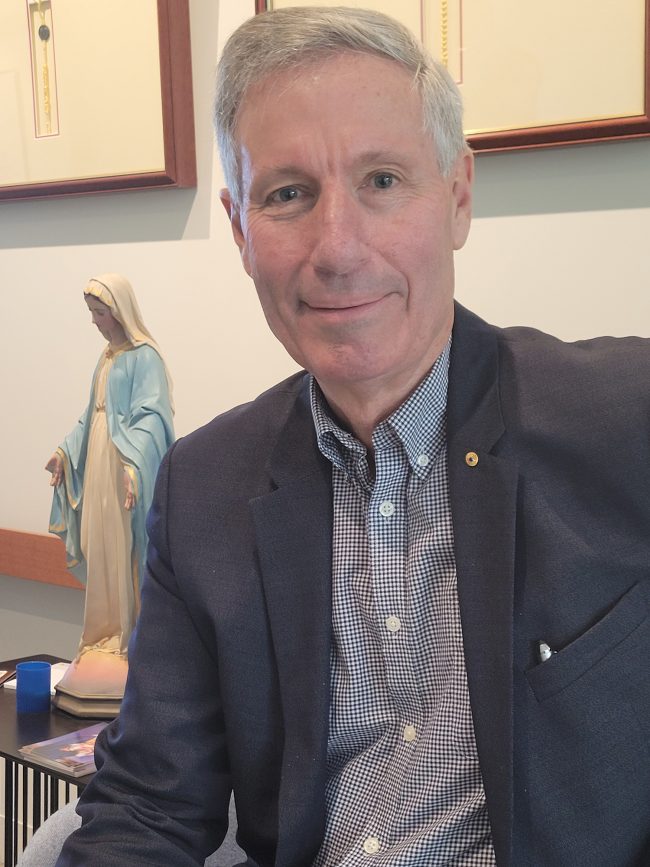 In terms of the official plenary process my role hasn’t been to do very much yet. I have a set of core beliefs about greater equality for lay people in the church especially women. I am a believer in increased transparency, accountability and co-responsibility in the church. I am an open-minded good listener. I believe the church is at a crisis point and there has to be some bold reforms taken.

What do you expect to come out of the plenary process?

The honest answer is, I don’t know. It’s a process that has been made much more difficult by the fact that we aren’t all meeting together, we are in multimodal hubs and online so in terms of the logistics that’s difficult and we haven’t had our training sessions yet and the agenda hasn’t been published yet. The aspirations have been set very high and I think there has to be something substantial across several areas in terms of the church’s internal operations and the church’s relationship with the wider world.

Some people are more or less happy with business as usual with some tinkering around the edges, but a whole lot of people are unhappy in terms of the place of women and Aboriginal and Torres Strait Islanders in the church, dealing with the ageing of the church, and it’s a necessity to do something about those.

What do you tell people who believe nothing will change?

I tell them that this is a great opportunity and try to put your scepticism on the backburner for a while to give the process a chance.

How confident are you that the outcomes of the plenary will represent the changing demographic face of the church?

The church is changing around us and in my own parish it is more multi-cultural than ever. The church has to engage with the hopes and aspirations of recent immigrants and the multicultural community. That depends on a willingness and confidence of the multicultural community to speak up for themselves and to engage and also listen to other delegates.

Do you feel you are a voice for a particular group of people in the Archdiocese?

I hope to be a voice for everyone. Having said that there’s no doubt because of my background and age I am a Vatican II Catholic and I hope to speak for the aspirations of Vatican II Catholics who have had a lifetime of hoping for church reform including a voice of the laity. I am not representing myself or the parish I belong to; I represent the National Aboriginal and Torres Strait Islander Catholic Council (NATSICC).

What do you expect to come out of the Plenary process?

I expect the Catholic Church in Australia to open their ears and hear Aboriginal and Torres Strait Islander people – I expect them to actively listen. We have talked, but they have not listened. Where are Aboriginal and Torres Strait Islander people in the Catholic Church? Nobody can answer that. We want to be part of the Catholic Church. But we feel we are not wanted. There are very few churches in this archdiocese that display Aboriginal religious artefacts or acknowledgment plaques.  We’re not on committees, parish councils, or liturgy committees. We’re not in any music ministries.

What do you tell people who believe nothing will change.

Well, be part of the change. A woman said to me, “don’t get on the Plenary Council; they’ll do nothing. It’s just priests.” I said, “You’re the one that’s always whinging and whining. You want an Aboriginal culture in the church and Aboriginal spirituality. If you don’t want to be part of it, nothing’s going to change. You have to say what you want. But you have to be in there, you can’t expect to sit outside Myers and want a pair of slacks – you need to walk into the shop!”

How confident are you that the outcomes of the plenary will represent the changing demographic?

This archdiocese has reached out to migrants, especially from India, the Philippines and South America. I think it’s great, all these cultures coming together. They’re accepted. However, the church is not reaching out to the Aboriginal people in this archdiocese, and that’s the shame.

Do you see yourself as a voice for a particular group of people?

I shouldn’t be, but I am a voice for Aboriginal and Torres Strait Islander people in this archdiocese. I represent those who are westernised and urbanised. Why not welcome Aboriginal people in your parishes? All you have to do is ask, and that’s not being disrespectful. Where do you come from, where’s your mob from, do you know anybody here? This makes people feel welcome. Aboriginal people are shy, and they’re out of their comfort zone when they come into a Catholic church. My role is representing the archdiocese. I have been involved since 2017 with listening and discernment groups. I made sure to go to the ones the Canberra cathedral parish was running because it is important to hear what others are saying and represent the people that I believe are on the margins.

What do you expect to come out of the plenary process?

I expect there to be some action and really positive change happening for our church. I am a little bit hesitant to have too many expectations because sometimes things can get lost in the words, but it’s important to remain hopeful and to challenge ourselves to believe that this can be something really powerful.

There’s lots of different perspectives and action plans on what people think should happen. I think some are expecting change on things that the Australian church can’t actually change. What has been really good about it being a plenary council rather than a general assembly, is that it does have some power to do that sort of church legislation stuff. People are expecting there to be changes in the way we have our governance structured, changes in church culture in how we respect and honour people from diverse backgrounds particularly women, young people and Aboriginal and Torres Strait Islander people.

What do you tell people who believe nothing will change?

I tell them it is really important to have hope and engaging in the process is how things will change. We have to have that kind of optimism and hope and we have to let it change ourselves first instead of expecting it to be the big picture.

How confident are you that the outcomes of the plenary will represent the changing demographic face of the church?

I am quietly hopeful. I think there could have and should have been more intentionality in the way they selected delegates or the way they had people representing the church to make sure we did include people of diverse backgrounds. I think that there are enough people who are aware that it is really important for shaping the future of the church that it won’t get left behind.

Do you feel you are a voice for a particular group of people in the Archdiocese?

I am wary that I can get put in the young woman and youth category. I want people to see that I am not just for young people or for women in this process, I am for all people.

Last month, an important milestone was reached with the publishing of the Agenda for the Plenary Council. It charges the Members with the responsibility of developing “concrete proposals” for the Church in Australia in response to 16 questions born of the last three years of conversation and discernment.

School funding after Batman and Longman

There's no letup in the school funding battle. It has featured in the last two rounds of federal by-elections. Economics writer Ross Gittins, with his ... Read More