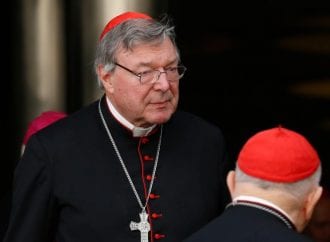 In an unanimous vote, the conviction of Cardinal George Pell has been overturned by Australia’s High Court, and the acquitted cardinal, who has always maintained his innocence, walks free after hundreds of days in jail, days before Easter.

“The Holy See, which has always expressed confidence in the Australian judicial authority,” the Holy See Press Office said in an April 7 statement,  “welcomes the High Court’s unanimous decision concerning Cardinal George Pell, acquitting him of the accusations of abuse of minors and overturning his sentence.”

“Entrusting his case to the court’s justice,” it continued, “Cardinal Pell has always maintained his innocence, and has waited for the truth to be ascertained.”

“At the same time,” it underscored, “the Holy See reaffirms its commitment to preventing and pursuing all cases of abuse against minors.”

Today, the members of the High Court accepted Cardinal Pell’s request to appeal an earlier conviction for the sexual assault.

In March 2019, Cardinal Pell was given a sentence of six years, with possible parole after three years and eight months. The Cardinal’s appeal was heard by a panel of three judges of the Supreme Court, June 5-6. Today, Aug. 21, at 9:30 a.m. in Melbourne, the judges handed down a two to one ruling, dismissing the appeal.

The Cardinal maintained his innocence and appealed their decision to the High Court of Australia.

The Director of the Holy See Press Office, Matteo Bruni, issued the following statement in Italian and English this morning, which reaffirms ‘respect’ for the Australian judicial system and closeness to victims of abuse, but reminds that Cardinal Pell “has maintained his innocence” and “has the right to appeal to the High Court.

Here is the full text:

“While reiterating its respect for the Australian judicial system, as stated on 26 February after the first instance verdict was announced,” the statement began, “the Holy See acknowledges the court’s decision to dismiss Cardinal Pell’s appeal.”

“As the proceedings continue to develop,” it reminded, “the Holy See recalls that the Cardinal has always maintained his innocence throughout the judicial process and that it is his right to appeal to the High Court.”

“At this time, together with the Church in Australia, the Holy See confirms its closeness to the victims of sexual abuse and its commitment to pursue, through the competent ecclesiastical authorities, those members of the clergy who commit such abuse,” the statement concluded.

One year after the fire, a French priest’s tribute to Notre-Dame

NEWER POSTArchbishop Christopher Prowse’s Easter Message
OLDER POST‘Prayer has been the great source of strength to me’: Cardinal Pell looks forward to Easter