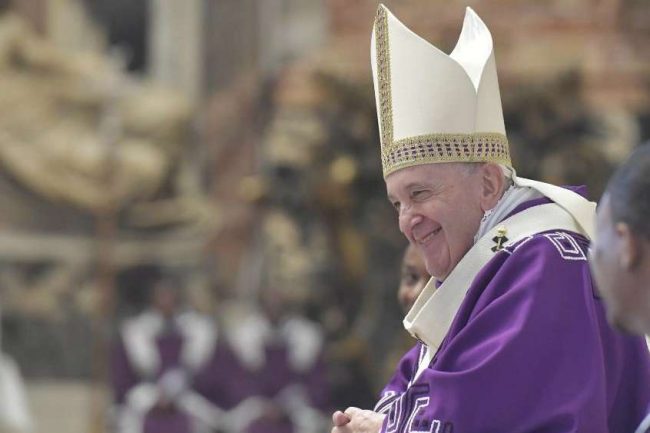 “Resist the dazzling lights of consumption, which will shine everywhere this month, and believe that prayer and charity are not lost time, but the greatest treasures,” Pope Francis said in his Advent homily Dec. 1.

“This is the drama of today: houses full of things, but empty of children,” he said in St. Peter’s Basilica.

Pope Francis celebrated an Advent Mass with Congolese immigrants, in which he warned against the selfish attitudes in a society where “consumerism reigns.”

“Consumerism is a virus that affects the faith at its root because it makes you believe that life depends only on what you have, and so you forget about God,” he warned. “The meaning of life is not to accumulate.”

Pope Francis celebrated the Mass at St. Peter’s  Altar of the Chair to mark the 25th anniversary of the foundation of the Congolese Catholic Chaplaincy of Rome. The inculturated Mass included traditional Congolese music and the Zaire Use of the Ordinary Form of the Roman Rite.

“Dear brothers and sisters, you have come from afar. You left your homes, you left loved ones and dear things. Once here, you have found acceptance along with difficulties and unexpected events. But for God, you are always welcome. For Him we are never strangers,” the pope said.

“Today we pray for peace, seriously threatened in the east of the country, especially in the territories of Beni and Minembwe, where conflicts are raging, fed also by the complicit silence of many. Conflicts fueled by those who get rich selling weapons,” he said.

“The Lord comes,” he said. “Here is the root of our hope: the assurance that the consolation of God reaches us among the tribulations of the world, a consolation that is not made of words, but of presence, of His presence that comes among us.”

BUSHFIRE VIDEO UPDATE: Celebrating the “Genius of the parish system”