Archbishop Balvo takes up appointment as Nuncio to Australia 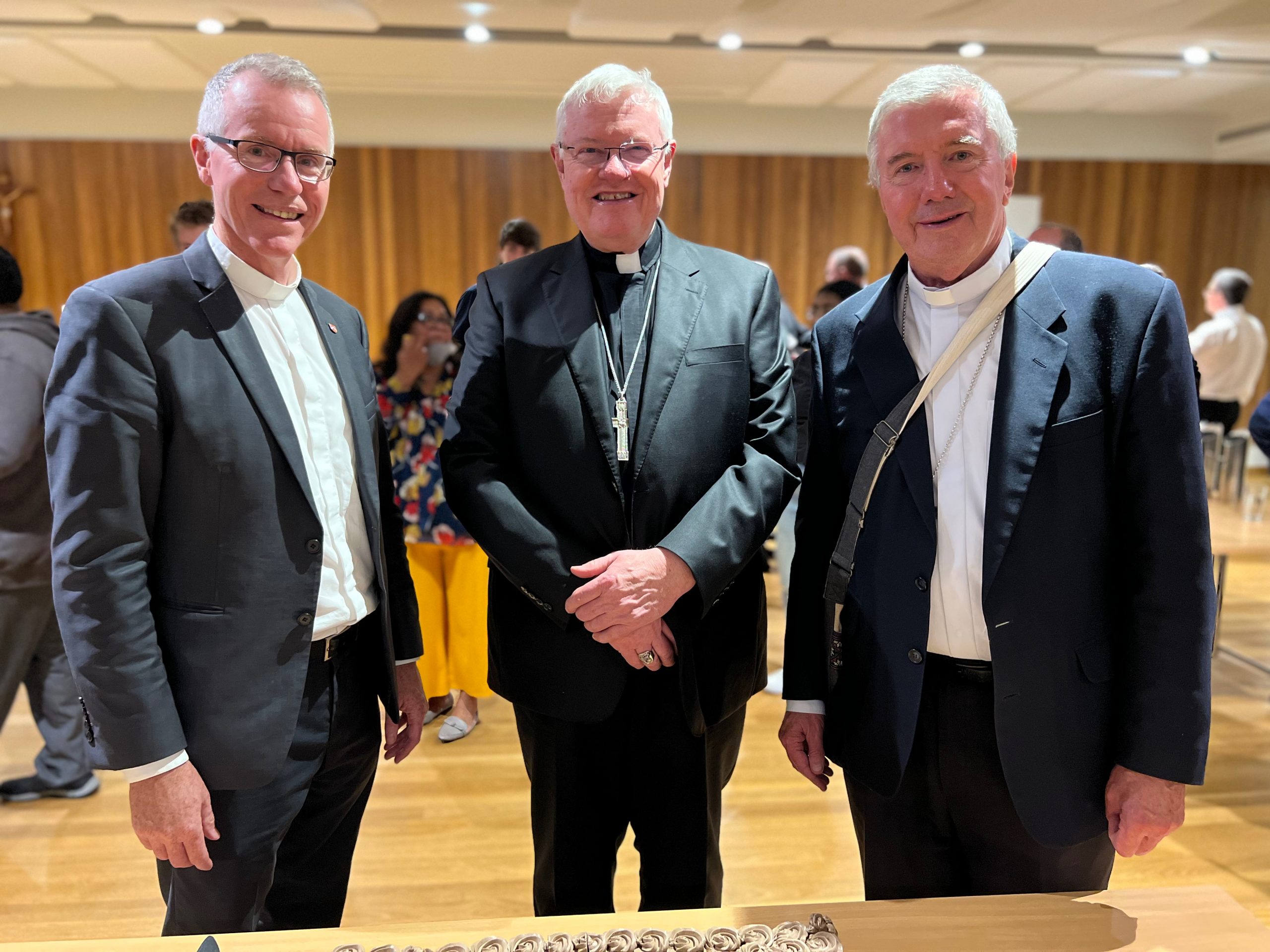 Archbishop Charles Balvo has arrived as Pope Francis’ ambassador to Australia in what the 70-year-old believes will be his final assignment after having already served 35 years in the Vatican’s diplomatic service.

Archbishop Balvo spoke with Gavin Abraham from the Australian Catholic Bishops Conference soon after his arrival in Australia. Here is part of their conversation.

You’ve spent the last 17 years as an Apostolic Nuncio. Can you tell us a little bit about what the roles and the tasks of a papal nuncio are?

It is that kind of a personal representation of what the Holy Father wants to be for the whole church. He can’t be everywhere. Certainly, in the past, Pope John Paul and Pope Benedict and now Pope Francis travelled a great deal.

So many people have been able physically to see the Holy Father. Those are one-time events and, you know, New Zealand for example, the only visit was in 1986. That really almost is ancient history for many.

In some places, people really have a living sense or an active sense that “You are the Holy Father for us, you’re his presence”.

So that’s the essence of our work to do that, to be able to communicate through what we say, in homilies and other things, some of the concerns of the Holy Father and then to keep him informed about how life is, both the life of the society and the Church in the places where we live.

We have certainly a lot of formal things as being an ambassador. You have functions in which you participate, Anzac Day for example, other things where you have these kinds of formal roles. But that really doesn’t take a lot of our time. Most of our time is with the Church. So, in order to know it, you have to travel.

Depending on where I was, I am invited to celebrate Masses, to lead pilgrimages, to give talks, interviews. That’s part of the work – to be able to communicate with people.

Probably the most important work that [Nuncios] do is we are the ones responsible for the process of gathering information and submitting it to the Holy Father for the appointment of bishops.

But that’s an important work and it takes a lot of discernment and a lot of physical hard work. Certainly, it’s much more a challenge just to try to identify, to discern the person who most likely would be the best or suitable for being the shepherd of the particular diocese. Here in Australia, there are some processes that are ongoing and there will be in the future as bishops reach 75 and offer their resignation to the Holy Father.

Pope Francis told you of your impending appointment late last year. You had important work to complete in the Czech Republic, but what were you expecting you might find within the Church in Australia?

My preparation was more generic, because we had quite a few things to finish, including a bishop’s appointment.

But I did know, although I didn’t know a lot about it, that there had been the [first assembly of the] Plenary Council that took place in October, which I discovered afterwards.

To be frank, I knew that the Church here was really hard hit by the sex abuse crisis. Coming originally from the United States, it was also a big problem. And it was felt at the beginning, it was just very localised. But in fact, it’s a problem that the Church has faced everywhere.

So, I knew that here you had had the royal commission. I don’t know a lot of the details still, and there’s now a lot of building confidence. How do you apologise for such a thing in an adequate way that people are able to trust you once again?

So, I know that just generally speaking, that it would be an issue here. How does the Church rebuild itself? How do you regain people’s confidence? It’s not something that I alone have to deal with, but it’s something that the Church as a whole does.

How will you spend the next few months to try and better understand the life of the Church in Australia?

Next week, I volunteered for the Holy Week Triduum to go where I am useful. Of course, I could always celebrate in a small group in the chapel at the Nunciature, but having had the experience of celebrating in parishes, and I know the importance of the Triduum to the life of the Church and particularly, for me personally, the Easter Vigil I feel is the most beautiful liturgy in the whole year.

I thought, well, where can I go? So, I made contact, since in Maitland-Newcastle there is no bishop, they said “You would be welcome.” So that’s a start.

Bishop Foley from Cairns has invited me; I said yes, I’d like to go. So little by little. Now it’s possible to travel throughout the country to do that. That’s how you see, what are the conditions of the Church. You talk to people and let people talk to you.

I know that when the nuncio arrives, they think “This big man is coming”, and in all these places they prepare the best. Anyone, if you have a guest, you want to show the best. If you bring somebody home, you don’t want to bring to the worst room in your house; you want to give them the best. I’m aware of the fact that sometimes you can think that this is the whole situation at this particular one big Mass that you’re invited to celebrate.

This is an opportunity to see the conditions in which people are living and to listen to people. So, my plan is to do that as much as I can do to visit different parts of the country. I’ve only touched a minimal part of Australia on these past occasions I’ve had to come.

Even when I was in the Czech Republic and Prague, some people would say “Would you really come to our little parish?” and I did. It doesn’t matter how many people are there. It’s a question of being the personal contact and to understand in some way the life of the Church in the country to which you are sent.

So, it is my intention to do that and to travel as much as possible, not to be on the road all the time. We actually have work to do, office work. But to do that, that’s important. Generically speaking, it’s my intention to travel and go to see all the dioceses, if that’s possible – not to see every corner of every diocese, that isn’t even possible in a small country.

In my life I’ve been very privileged in that sense. Even before I was in West Africa, I was in Latin America. I was in Jordan, in the Middle East. I was there in the Czech Republic once. I spent time in the Baltic States. And when I was in Chile, I had a unique experience, which was to travel on a Chilean icebreaker to Antarctica and to celebrate Mass even there in a chapel at one of the bases.

I thought I would spend my whole life just working in the tiny little Archdiocese of New York. But then I’ve managed to see a great deal of the world.

It’s one of the things that you see, all the different ways that the Church lives. The most uniting aspect, of course, is the Mass, the Eucharist, which we are all celebrating and in different ways – a European Western tradition, the African traditions, the Pacific Islands – there are different ways in which the liturgy is celebrated.

There is this union of the Church that those who have more freedom will pray for those who do not. We have that sense of unity which will overcome so many, many difficulties. There are other countries in the world right now where practice of religious faith is very difficult or impeded in some way.

I think [universality] is a very, very strong value because sometimes churches can become very national in the sense that they’re very much identified with their country, which in a way is certainly natural. You know, we are Australian, American or Czech, and we relate to where the Church is, whatever history of the place in which we live. But we are also free from that. We have the ability to step back and see how the life of where we are living can be better.

The Church can be prophetic and speak to issues, which I think is one thing of having a universal Church and not one tied just to one place.

But as I said, the most uniting thing is that we are together praying in the liturgy, listening to the Word of God and sharing the Eucharist.

How can the Church respond to the needs of the faithful and the wider society?

One of the things that people have always appreciated about the Church in different places is a life of service – how much they do. In some of the places where I’ve lived, like in Africa, in Kenya or even more in South Sudan, that education, health care, so much of this is through the Catholic Church, through the sacrifice especially of religious men and women.

So, I think that’s one of the ways in which we can help overcome some of the difficulties that we have faced, especially with trying to regain people’s credibility, is through service, how we can serve those who are most in need, the marginalised and really dedicate ourselves to that.

A key component of the Plenary Council’s assemblies will help members to consider the 16 questions that make up the Council agenda. Each day, some of ... Read More