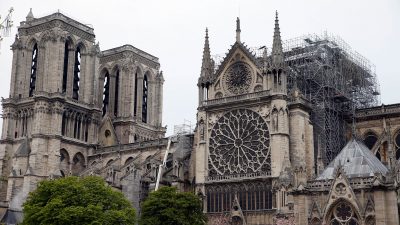 Paris, France, Jan 11, 2020 / 06:01 am (CNA) – A leading architect in France has urged that the roof of Notre-Dame de Paris be reconstructed out of wood, for the sake of the building’s structural integrity.

Eric Wirth of the Guild of French Architects, expressed at a French parliamentary hearing Jan. 8 that rebuilding the roof with concrete or metal would be a mistake.

“We have to be sceptical of seemingly brilliant solutions” involving metal or concrete rafters he said, according to AFP.

“The most modern and ecological material today is wood,” Wirth said.

He said the cathedral is still at risk of collapse after a fire struck the cathedral in April, destroying the roof and spire and damaging the windows and vaults. He said alternative materials to wood might have resulted in further damage to the cathedral.

“The cathedral has been there for 800 years. Had it been built in concrete or steel it would not still be there,” he further added.

“Even with all the (chemical) protection treatments, given the intensity of the blaze… the steel would have held for half an hour and then it would have twisted, pulling on the walls and everything would have collapsed.”

He said that even if metal or concrete roofs were lightweight, the building’s structure is built for a heavy roof, and that such Gothic cathedrals “stand up structurally because there is a large mass on the vaulted ceiling … they only work because the roof is heavy.”

“We are lucky to have all the information we need to rebuild an identical roof.” The comments came after Jean-Louis Georgelin, army general in charge of the restoration, said the call for an oak roof is just “lobbying” by wood industries. He said all options will be analyzed before anything is put in place.

“There will be a study, and all possible options will be examined,” said Georgelin, according to AFP.

In November, Georgelin had disagreed over whether the cathedral’s new spire should look modern or medieval. Georgelin, who supports a “contemporary” spire, reportedly told the architect Philippe Villeneuve that he should “shut his mouth” over the spire’s design.

Since the adoption of the 1905 law on separation of church and state, which formalized laïcité, a strict form of public secularism, religious buildings in France have been property of the state.

In December, the cathedral’s rector expressed concern that the Church is still at risk of destruction and may not be able to be reconstructed safely.

The church “is not out of danger,” Monsignor Patrick Chauvet said to the Associated Press Dec. 24. “It will be out of danger when we take out the remaining scaffolding.”

“Today we can say that there is maybe a 50% chance (the cathedral) will be saved,” said Chauvet. “There is also (a) 50% chance of scaffolding falling onto the three vaults, so as you can see, the building is still very fragile,” he added.

The scaffolding, present at the time of the fire on April 15, had melted together, and there are still about 551 tons of metal still present on top of the cathedral.

He said that after the scaffolding has been removed, the team will be able to better assess the state of the cathedral and begin the restoration. He said the scaffold will not likely be removed until 2021 and does not think the cathedral will be completed in time for the 2024 Summer Olympics in Paris, as French president Emmanuel Macron has vowed.

Today we had a slower day, opting to have catechesis and mass as a group in the hotel. Read More