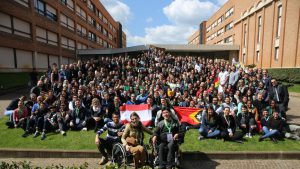 YOUNG Catholic delegates have returned from a week-long meeting in Rome with Pope Francis, energised, enthused and calling for a more transparent and “authentic” Church.

“Just for us to be heard, and to speak our minds within the Church and to get feedback and a response from an older generation that was ‘Oh, yes, we’ll listen to that and we’d love to interact and help you grow’,” Brisbane delegate Lachlan Tomkins, one of 300 delegates representing young people from five continents, said.

“I came back seeing a new potential.

“I was renewed in faith, and being able to have this interaction has allowed me to see that the Church does want to grow, does want to change.

“It has pulled me back into wanting to participate and wanting to be at the forefront.”

Mr Tomkins, studying his final year in primary education at Australian Catholic University was one of four Australians who joined delegates preparing a 16-page document for the Synod of Bishops on Young People, the Faith and Vocational Discernment planned for October.

The document, which also drew on 15,000 online submissions, is focused on how to better incorporate young people into the Church.

Another Australian delegate Stephanie Santos, was impressed that youth from different faiths were included in the meeting.

“It was very interesting to be part of a conversation about the Church from so many different viewpoints,” she said.

“This document offers me hope, in the sense that I hope that the Church continues to listen.

“We need to listen to everyone: young and old, Churched and un-Churched.”

Mr Tomkins was impressed as Pope Francis spent “a good two to three hours” listening and participating in the pre-synodal meeting.

“Just the respect he had for the voice of young people. I guess he left us all with a sense of empowerment,” he said.

The “youth document” asks the Church hierarchy to “be a transparent, welcoming, honest, inviting, communicative, accessible, joyful and interactive community”.

Catholic Religious Australia (CRA) supports the coalition of groups meeting on 14 October 2018 to ramp up the campaign for more humane asylum policies in ... Read More