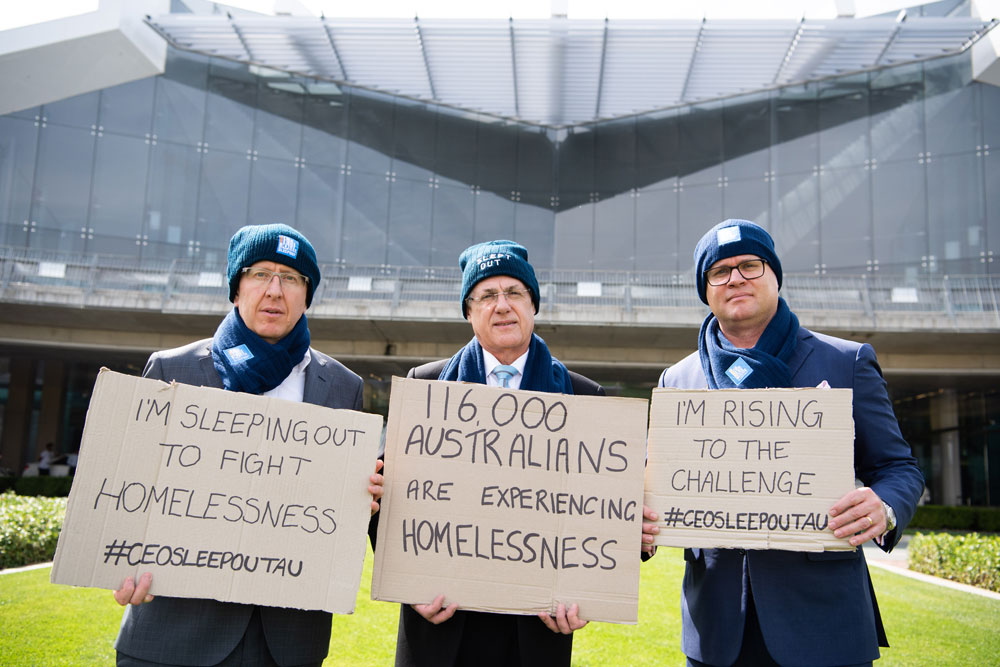 Stephen Byron, Barnie van Wyk and David Tyack, rugged up and ready to go for the Sleepout. Photo supplied by Vinnies media.

While the recent cold snap has caused most of us to reach for an extra jumper or blanket, spare a thought for the participants in the 2019 Vinnies CEO Sleepout.

And if you’re sparing a thought for them, spare a lot more thoughts (and hopefully a few dollars) for the many homeless battling the cold every night.

The brave souls who have volunteered for the CEO Sleepout will be bunking down in Hangar 47 at the Canberra Airport on the night of June 20.

“While sleeping out for one night will never be a true experience of homelessness, it is a chance to gain an insight into what that experience might be like,” said CEO of St Vincent de Paul Society Canberra/Goulburn, Barnie van Wyk.

“And here at the airport where it’s frequently colder than other parts of Canberra, and with the noise of planes and trucks and crew, our participants will gain a greater understanding of the realities of what it is to sleep rough.”

The Top 10 Leaderboard for fundraising by participating CEOs as at May 29 was as follows:

This is the tenth anniversary of the CEO Sleepout in Canberra. To find out more about the Sleepout, or to make a donation, go to https://www.ceosleepout.org.au/event/canberra .

Progress towards the joint venture between Equip Super and Catholic Super is continuing with the appointment of Anna Shelley as CIO for both funds. Read More