Faith and a double whisky for Jack’s 100th birthday 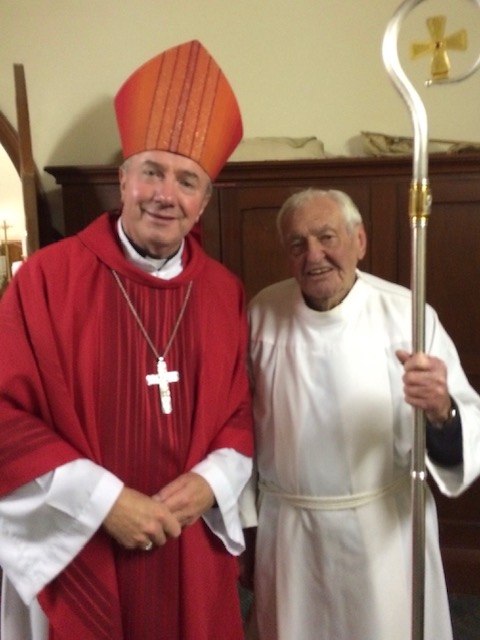 “Something fantastic” – that’s how Jack Grant described his Catholic faith as he celebrated his 100th birthday today.

Archbishop Christopher Prowse phoned the Grenfell father-of-eight to wish him happy 100th birthday and asked Jack what his faith meant to him.

“I don’t think I could have ever lived without my faith,” Jack responded.  “It’s been something fantastic.

“I can still remember my Mum getting me out of bed to go to Mass when I was a seven or eight year old boy and an altar server.”

Jack is still at Mass every Sunday and was the oldest acolyte in the Archdiocese until he gave it away about 18 months ago.

“Do you remember when I visited Grenfell for a pastoral visitation a couple of years ago and I put my mitre on your head?” Archbishop Christopher asked Jack.  “We had a photo together.

“Your wife Meg is not with you to share your birthday Jack but I’m pleased you are with some of your children and grandchildren.”

Jack had a party planned at home for last Saturday evening but had to cancel it due to the pandemic protocols.

But he celebrated today with daughters Felicity and Carmel who both live in Wagga Wagga.  A steady stream of phone calls kept Jack busy with birthday greetings and some grandchildren and a great-grandchild also popped in.

Jack’s wife Meg died in October 2017, aged 93, and Jack lives alone in Grenfell.  He keeps in good health, perhaps due to his love of red and white wine.  Jack recently renewed his drivers licence and drives to the chemist and paper shop.

The centenarian is also known for his famous Irish cream.

“What’s kept you in good health all these years Jack?” Archbishop Christopher asked on the phone today.  “Is it the potatoes or the whisky?”

“I’d have to say the whisky,” Jack replied emphatically.

“We all know about your whisky Jack, your famous Irish cream,” Archbishop Christopher said.  “You’ve got the two spirits going then, the Holy Spirit and the alcoholic one.

“Have a double whisky on behalf of the Archbishop today!”

Last week Archbishop Christopher sent Jack a birthday letter on behalf of the Archdiocese and he gave him a blessing on the phone today, for Jack, his wonderful wife Meg in heaven and his large, devoted family.