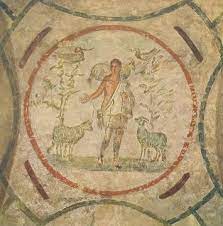 The Gospel of John has seven ‘I AM’ statements, including ‘I AM the Good Shepherd’ (John 10).

Good Shepherd Sunday – a time when we are especially attentive of our need for ‘shepherds who will lay down their lives for the sheep.’

We don’t need a lot of priestly shepherds. We just need good ones – those who ‘lay down their lives.’

Born in France in 1803, he joined the new Marist Fathers for mission. He was sent to the Island of Fortuna, where he learned the language and customs.

The son of the local chief was moved by the Holy Spirit and sought baptism from Peter. His father reacted by having Peter clubbed to death.

The blood of martyrs is the seedbed of Christians.

But the chief did not remain unrepentant. Several years later, closer to death, he converts.

He specifically requests that his grave would be placed at the entrance to the Church, so that people would be able to walk over his mortal remains in order to venerate the relics of St. Peter Chanel.

There you have it, just as St. Mother Teresa of Calcutta said:

God does not want us to be successful, but faithful.

St. Peter Chanel, pray for us.

Watch out, God is moving

Here at the beginning of the early Church, the Holy Spirit moves in ways that were outside of the experience of the Jewish Christians. People ... Read More