This year the Goulburn Mission, which was initially the heart of the Diocese, will celebrate 180 years. Former Senator and current CEO of Catholic Social Services Australia, Dr Ursula Stephens, has written this retrospective on the Parish now called Mary Queen of Apostles.

The Parish of Mary Queen of Apostles, Goulburn, now the Centre of the Goulburn Mission, will celebrate 180 years of glorious history on September 15th, with a celebratory Mass and Parish lunch, to which everyone with a connection to Goulburn’s Catholic community is invited.

The first Mass in the Goulburn District was celebrated by Father Therry in 1833 at Matt Healey’s Inn (now called “Riversdale” – a National Trust property). This was also the location of a celebratory Mass in 2012 to Mark 150 years of the Archdiocese of Canberra and Goulburn .

In 1840, Archbishop Polding visited Goulburn to lay out the site for the first church. The construction of the Sts Peter & Paul’s Parish Church began on the corner of Bourke and Verner Streets in 1844.The original brick church was completed in 1848.  Some of the old church foundations are still visible under the Cathedral floor today.

The Diocese of Goulburn The Archdiocese of Canberra and Goulburn evolved from the Diocese of Goulburn, which was created on 17 November 1862. The first bishop, Patrick Bonaventure Geoghegan, died before taking up his appointment. He was succeeded by Bishop William Lanigan who arrived in the diocese on Pentecost Sunday 1867.

At this time, there were seven parishes, served by ten priests and one congregation of religious, the Sisters of Mercy at Goulburn. The Sisters of Mercy had come from Ireland to Goulburn in 1859, to establish the Convent and School which eventually became Our Lady of Mercy College.

Caroline Chisholm recognised the strong Catholic roots of the new settlers to the region and brought many girls and families to her depots at Goulburn and Yass in the hope of finding employment and perhaps marriage.

In 1880, Henry Parkes secured passage of the Public Instruction Act , which introduced compulsory free education and severed connections between the church and the public schools. This prompted Bishop Lanigan to establish an independent Catholic school system.

In the 1860s and 1870s in Australia, the withdrawal of state funding for church-sponsored or denominational schools in all states led to an almost total reliance on religious congregations to administer Catholic schools.

The work of Tennyson Woods and Mary MacKillop greatly influenced this movement. The bishops’ desire to have a school in every parish had a higher priority than their desire to have a parish church. Thus was established the traditional Catholic enclave of church, convent, presbytery and school which was to be found throughout the country. In larger centres there was the addition of a separate school for boys and a ‘monastery’ for the religious brothers.

The former St Patrick’s College in Goulburn (now Trinity Catholic College ) was one of the oldest Catholic boarding schools in Australia.The college, founded by the Goulburn Catholic Diocese in 1874, was operated by the Christian Brothers from 1897.

Father Richard Walsh was appointed Goulburn’s first Parish Priest in 1847.  After the church was opened in 1848 by Archbishop Polding, work began on the construction of the presbytery next to the Cathedral on Verner Street Goulburn.

Construction of the Cathedral Artists sketch of the Cathedral

In 1871 the construction of the St Peter and Paul’s Cathedral commenced. The Cathedral was built in two stages and was constructed around the original 1843 church (when the cathedral exterior was completed the old church was demolished and the materials were removed outside through the cathedral doors).

The former Cathedral has important associations with key figures in the Catholic Church in NSW. Bishop Polding, the first Catholic Bishop of the colony, selected the site for the church in 1840 .

Cardinal Moran laid the foundation stone for the sanctuary in 1887, opened and blessed the Cathedral in 1890 and dedicated it in 1898. Its construction was largely due to Bishop Lanigan who served the Catholic community for many years and is buried beneath the sanctuary. Sts Peter and Paul’s Cathedral was the only cathedral in Australia entirely built and consecrated under the one Bishop. It is built from locally quarried green porphyry and Sydney sandstone.

Five sisters of St Joseph arrived in Goulburn in 1882 and settled in a convent built in North Goulburn, establishing St Joseph’s primary and secondary schools. The north Goulburn parish thrived and the first church was replaced by the Church of Our Lady of Fatima,

The Sisters of St John of God order came to Goulburn from WA in 1916 at Bishop John Gallagher’s invitation to establish a 13-bed hospital in a doctor’s residence, bequeathed to the church.

The facility grew to 24 beds, including a male and female ward and by 1950, additions and alterations took it to 70 beds, complete with a children’s ward, coronary care and intensive care units. In 1979 the hospital became a private provider of publicly funded health care and its services have expanded considerably, including oncology and palliative care.

The School strike of 1962 and beyond 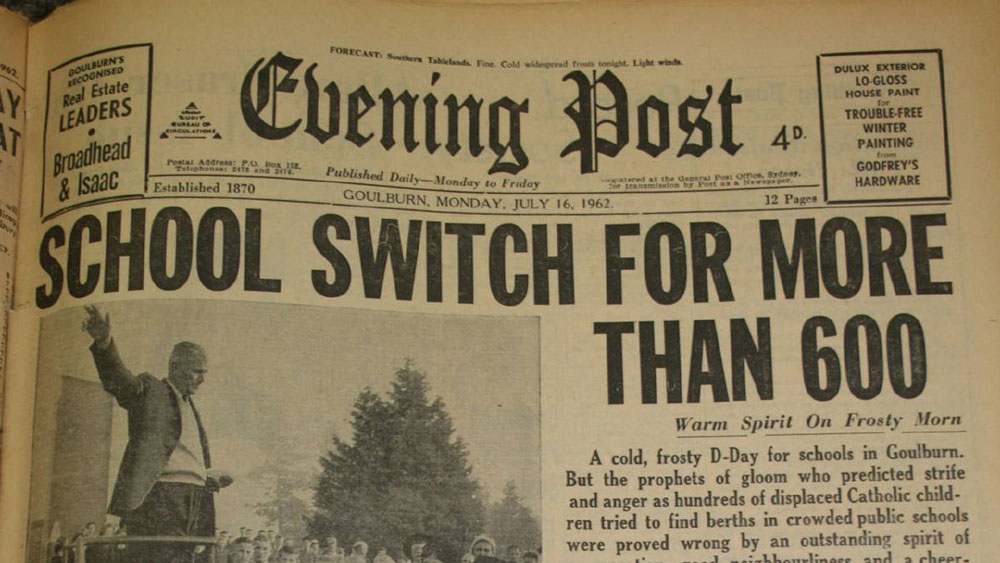 The school strike that reverberated around Australia, as reported in the Goulburn Evening Post.

On Friday July 13, 1962, six Catholic schools in the Goulburn diocese were closed for six weeks and 2000 pupils directed to enrol the following Monday in the government school system which had only 640 vacancies. Known as the Goulburn Strike, it was in protest at the refusal of NSW health authorities to install additional toilet facilities at Our Lady of Mercy Preparatory School . It is seen as a significant turning point in the state aid debate.

Other significant events in the long life of the Parish include the transfer of the Diocese of Goulburn to Canberra in 1948, and the subsequent construction of St Christopher’s Cathedral, with the Cathedral of Sts Peter and Paul, relegated to the status of the Old Cathedral.

The restructure of Catholic secondary education and the withdrawal of the religious congregations from education, led to the establishment of Trinity Catholic College . This coincided with the amalgamation of the Goulburn and North Goulburn parishes and the formation of St Mary Queen of Apostles Parish as part of the wider Goulburn Mission, which now encompasses Bungonia, Taralga, Crookwell , Goulburn, Marulan , Tarago and Collector .

Tickets for lunch are $50, and bookings can be made at www.Trybooking.com/511492 or by emailing goulburnparishevents@gmail.com.

Proceeds will go to the restoration fund for the old cathedral.

This year St Augustine's parish celebrates 180 years. Here is a potted history of what has gone before. Read More