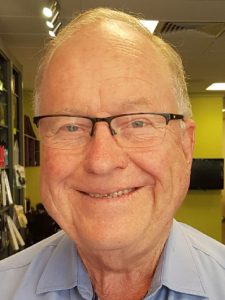 THE LOCATION lottery that landed Fr Steve Astill, SJ at the Young Mission in January after spinning him through possibilities in Bega, Narooma and Manuka since arriving in the Archdiocese in December was hardly anything new for the Jesuit priest.
He has spent his life wondering where he is going to end up next.
From the moment he was born, when his father’s job with Shell took the family from Brunei to Iran and the three capitals down Australia’s eastern seaboard, he has moved with God’s will.
Even one of his longest stints – 17 years in Nigeria until 2008 – came from the roll of a dice, when he responded to the Jesuits’ call for volunteers to work in Africa without knowing where he would be assigned.
There he worked at the Lagos University Teaching Hospital (LUTH), where he ministered to patients, students and health care professionals, guided by the hospital’s mission “to identify the presence of God through their encounters with sickness, accidents, disease and even death itself”.
Back in Australia, he ended up in parishes in Western Australia’s Hamilton Hill and East Fremantle after short stints in South Australia’s Clare Valley and North Sydney. In Perth, he taught theology to medical students at Notre Dame University – an increasingly challenging job as a new generation of students focused on “strategic learning” rather than the liberal approach that embraced religion as part of the bigger picture.
It was what Fr Astill tagged “Jexit” – the Jesuits’ decision to pull out of Western Australia and Queensland because of flagging numbers – that brought him to Canberra.
“I would have preferred a soft Jexit, but it was more like a hard one,” he says, adding that it was nevertheless the right call.
Fr Astill would put none of this, including his decision as a young man to divert from a career in law to the priesthood, down to luck or fate, however. A believer in the “greater glory of God” and “finding God in all things”, he also subscribes to the notion of empowerment and individual liberty.
Those beliefs will guide him when he takes a sabbatical at a Jesuit silent retreat in Canada later this year, “looking for what the future might hold for me”.

Helen Delahunty: Looking back on 2019