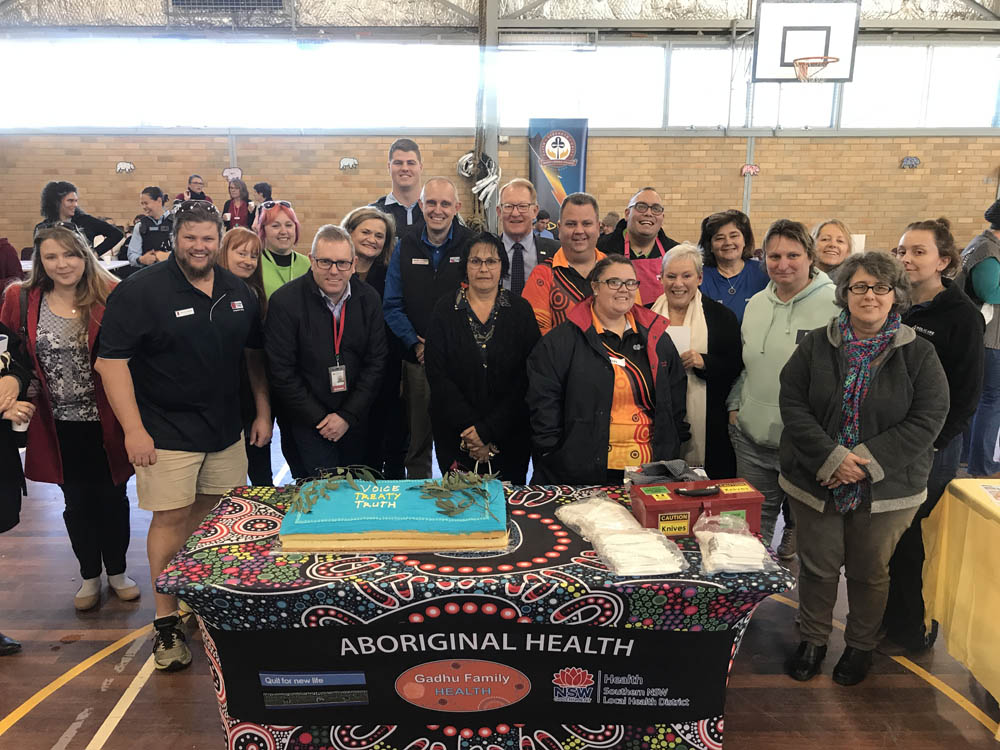 Representatives from some of the services that took part in the second annual Koori Cook Off at Trinity College in Goulburn. Photo Chris Gordon.

There are few communal activities that bring people together as well as a shared meal, and that’s part of the idea behind the Annual Goulburn Koori Cook Off.

The Koori Cook Off was celebrated at Trinity College this week as part of the national NAIDOC Week celebrations.

Now in its second year, organiser Rick Shipp said the popular event was a great opportunity to share not only customs but fun activities to bring different communities together.

“What we’re doing is cooking some traditional food, so we’ve got some Kangaroo meat, some fish and so on, and then some non-traditional food as well,” Rick said.

“It’s about coming together, celebrating NAIDOC, with this year’s theme “Voice, Treaty, Truth – Work together for our future.”

“The idea is to bring the community together with an Aboriginal focus that celebrates our culture. Traditionally that’s what we did a lot in past times, coming together, having corroborees, lots of family and community time, celebrating our good times. And that’s what we’re doing today.” All Goulburn and Crookwell High Schools took part along with community service providers, local police and members of the community.

Teams would prepare a meal (which could use native Australian ingredients, but didn’t have to) and then were judged by a panel of community representatives.

Trinity Principal, Gaye McManus, described the Cook Off as a fantastic opportunity for community groups to come together and celebrate NAIDOC Week.

“We were thrilled with the number of people who attended to recognise and celebrate Aboriginal culture,” Ms McManus said.

“It was a credit to Mr Rick Shipp for bringing it all together; an outstanding community event involving our young people. It was our privilege to host the Koori Cook-Off.” Rick, a Board member of Pejar Local Aboriginal Land Council and the Aboriginal Health Team Leader at Southern NSW Local Health District, said the team behind the Koori Cook Off felt encouraged to hold the event again after the success of last year’s Cook Off.

“It went off really well, so this year we tried to collaborate a little bit more with some of our local services, and also the High Schools,” he said.

“And we’ve had a really good response from all of the High Schools in Goulburn and Crookwell who’ve enjoyed it and come on board to support it.”

Last year’s NAIDOC theme was “Because of her we can”, which recognised the influence and sacrifice of women in Indigenous communities and families. Rick said that he believes one of the important aspects of NAIDOC Week is the positive, community minded themes.

“Traditionally the blokes were the hunters and gatherers and the women would be at home doing the weaving and cooking and looking after the family, and sometimes that’s not recognised enough” Rick said.

“And this year, same as last year, we take this time to reflect on our past, and on our values and remember that our values can sometimes get lost, we can get lost in ourselves and caught up in the day to day business that we do, so it’s a good time to remember those days and come together.”

The three words of this year’s theme – Voice, Treaty, Truth – were three key elements to the reforms set out in the Uluru Statement from the Heart. While there is still much work to be done for First Nations people in Australia through political processes, Rick believes that community activities that outreach and share Aboriginal customs are also part of the bigger picture of addressing Indigenous issues.

“I think collectively it all comes together in different ways, and there are just different messages and different focuses,” he said.

“And these community events are an important piece of the puzzle. Ultimately I think it’s all about our culture and just keeping that strong within ourselves. It can get lost if we forget to do things in the traditional ways.

“What we’ve been taught from our uncles and aunts, and from our grandparents… if we’re not still carrying out those practices and ways, it can be lost. It’s the encouragement and direction we’ve been given and sometimes we have to make time to keep them alive and remember not just our ways but those who shared them with us. And that’s the same for all cultures, we have similarities and ways to relate and connect.”

Central to the event, though, is the concept of sharing… and not just sharing Aboriginal culture but other cultures from the community.

“We do have a lot of Aboriginal and Torres Strait Islander students here today but non-Aboriginal kids are invited to come along and join the party,” he said.

“We welcome everyone with open arms, say `hey, this is our culture’, and we live out the theme: let’s work together for our future. Hopefully people can take something away from that.”

Rick, whose son is a student at Trinity College, thanked the school for hosting the event, and thanked all of the schools and services that took part in and supported the Cook Off.