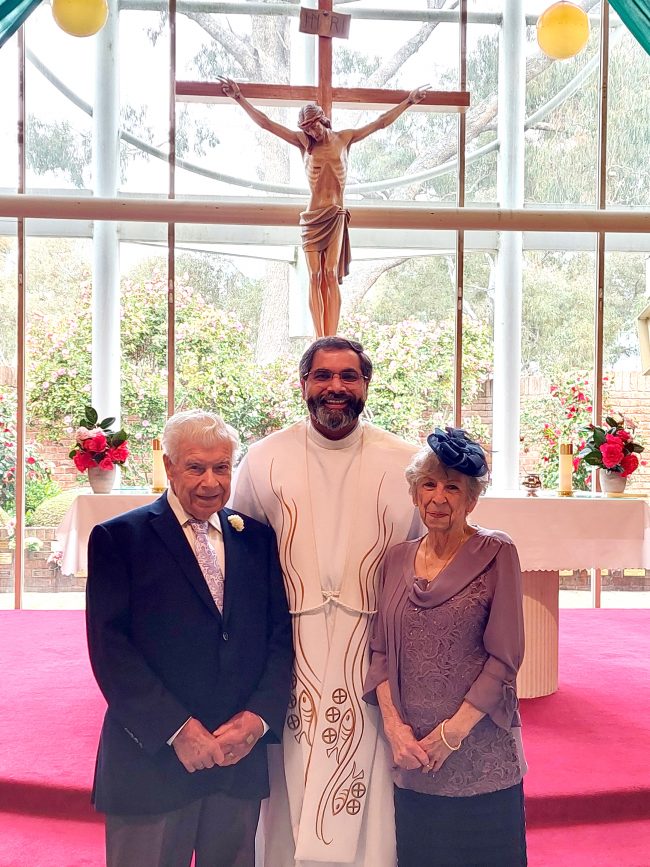 Romance being what it is in the age of technology they met online, sharing a mutual love of family history research.

But then love being what it is, Ron Norton and Rosemary Rogers fell in love, too.

The handsome groom is 92, the beautiful bride 82.

With the wedding taking place in the midst of the lockdown, the only witnesses present aside from the celebrant were Ron’s daughter Leslie Hayward and Rosemary’s son, David Thomas.

In a poignant touch, David officiated as Ron’s best man and Leslie as Rosemary’s matron of honour.

It is a marriage of words and numbers for Ron and Rosemary. He’s a former journalist and newspaper editor, including with the Canberra Times; she was an accountant.

Rosemary was living in Sydney and Ron in Canberra when they first met over the internet five years ago. Email exchanges and telephone calls followed leading the accountant to weigh up the numbers and make a decision to relocate to Canberra in late 2016.

“It was a good place to move to and plus it had a bonus,” she said with a chuckle.

The relationship with the “bonus” developed to a point where earlier this year at Ron’s great-granddaughter’s wedding the idea of marriage came to a head.

“We’d been talking about it for some time,” said Ron. “Being at the wedding stirred the emotions and I proposed to Rosemary that night.”

She said yes, apparently without too much hesitation. “I think I’d waited long enough,” she said with another chuckle.

The lady of the numbers did the figures and decided instinctively they would get married on the eighth of the ninth this year.

To their delight, the date coincided with the feast of the Nativity of the Blessed Virgin Mary.

They are parishioners at Holy Family Church where they were married but were both initially Presbyterians who came to Catholicism late in life.

Ron became a Catholic in 2014, with Rosemary following a year later after a series of family bereavements.

“It’s just so great, so peaceful, so fulfilling in my life to have that [becoming a Catholic] and to be accepted as a member of the beautiful church,” she said.

For the couple, their marriage holds a message at this difficult time for many.

“At our age we’ve shown people that even in [this time of] adversity love can nourish and be fulfilled,” Rosemary said.

Melinda Mao’s parents faced the decision no parents want to face.In 2008, their high achieving daughter lay in a coma in a Hong Kong hospital. Read More