WASHINGTON (CNS) — Heidi Vass, music director at La Reina High School and Middle School in Thousand Oaks, California, was searching for a way to keep her students singing even though distance learning kept them from singing together.

Each week, Vass sends her students the music, as well as a “scratch track” — a rough recording of her accompanying herself on the piano while she takes on the role of cantor — to the responsorial psalm for the upcoming Sunday as found in OCP Publications’ annual “Respond & Acclaim” psalm collection.

Students record their voices on an mp3 file and send it back to Vass. Some of the students sing the melody, while others take a different voice part as the arrangements have lines for alto, tenor and bass.

It’s then Vass’ job to take 15 to 30 mp3s and synchronize them. The finished product is then posted on YouTube. (For a sample, go to https://www.youtube.com/watch?v=xdRHnAuVk1E).

Musically, Vass felt that hole in her soul almost as soon as it was announced that Catholic schools in the Archdiocese of Los Angeles would not have on-site classes effective March 16. The same held true for archdiocesan parishes; Vass is a cantor at St. Paschal Baylon Parish, also in Thousand Oaks.

“I knew immediately I was going to miss singing with my congregation and with my students,” she told Catholic News Service, adding she started thinking, “How do I bring my community together, especially with the situation we have?” 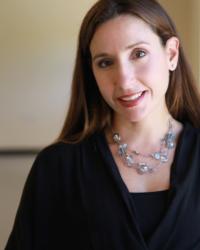 CNS photo/courtesy Heidi Vass – Heidi Vass is the music director at La Reina High School and Middle School in Thousand Oaks, Calif., and is currently on the voice faculty at California Lutheran University.

Vass said, “I’m a very observing Catholic, and the idea of not marking Holy Week or having anything for Easter or Lent, and not having my community gather, was something that didn’t seem bearable.”

The idea for the Psalm Sing came about fairly quickly, but executing the idea was not as immediate. “It took about a week to figure out how I was going to edit” the mp3 files returned to her, she said.

The Psalm Sing is optional for Vass’ students. And, since her parish uses Respond & Acclaim, she’s invited the parish choir to participate.

“It gives them something to do, first of all, but pulls from the beauty of our own liturgy,” Vass told CNS. “And it changes every week. It was a given programmatic thing that we have in a beautiful liturgy every week.”

While an optional project for students, “some of them will send me tracks with three or four different harmonies. I’m glad of that, I’m grateful for that,” Vass said.

“The beauty of it is you get the chant in the verses. I’m chanting the verses. I miss cantoring and singing with the congregation. It gives me an opportunity to do the chants in the verses and then bring everybody in for the chorus.”

The results are varied. Vass has had to, er, refrain from editing out every imperfection she hears — including the squeak from a pedal on her piano.

“Liturgical singing is about community and coming tougher. When you have those flaws in tempos and someone’s a little ‘pitchy'” — Vass’ way of saying slightly off-key — “it sounds more like a congregation. … We’re not mixing it hard. We’re literally mixing it together. We’re not trying to make it something that it isn’t.”

There’s no telling when the COVID-19 lockdowns will ease, but given the liturgical cycle, “I have plenty of material,” Vass said. “If we’re in for coronavirus for the next three years, I’m in good shape.”

Analysis: Pope Francis and the Germans

NEWER POSTHow have we changed?
OLDER POSTThis time is a test we can embrace