A PLEA has been made by the St Vincent de Paul Society in Australia for the Federal Government to show compassion to an asylum-seeker couple and their daughters by allowing them to return to Biloela. National President Claire Victory said the Minister for Immigration, Citizenship, Migrant Services and Multicultural Affairs should exercise his discretion and grant a visa extension for the Murugappan family until a permanent solution can be reached. The team at UNSW used the 2015 research grant awarded by the archdiocese to accrue data to improve the quality of corneal transplants. PHOTO: Supplied

SYDNEY Archdiocese is inviting medical researchers to apply for a $100,000 grant to support ethical research in Australia at the service of human life. Archbishop Anthony Fisher OP said the grant, the tenth offered by the archdiocese since 2003, is aimed at supporting innovative research which respects Catholic moral teachings. “We are committed to a culture of life, including scientific research that respects human life from conception until natural death,” he said. 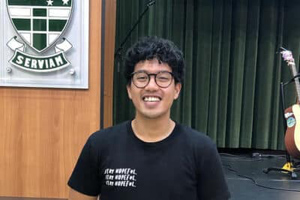 The team at UNSW used the 2015 research grant awarded by the archdiocese to accrue data to improve the quality of corneal transplants. PHOTO: Supplied

ABOUT 700 Sydney Catholic Schools’ students explored their faith at an Evangelisation Day hosted by St Ursula’s Catholic College Kingsgrove. Year 9 and 10 students from 36 secondary schools reflected on the theme Made for More. They heard from guests, including alumni, whose lives had been transformed by faith. Among them was former De La Salle College Ashfield student Tommy Francisco, who is now a musician and youth minister, who plays to sold-out venues across Australia.

QUEENSLAND Deputy Premier Steven Miles said Church-run health facilities and nursing homes must allow voluntary euthanasia for terminally ill patients who could not or would not be moved to other facilities. The bill will allow doctors to perform euthanasia on patients or residents at Catholic health facilities without asking for permission or notifying the facility. Brisbane Archbishop Mark Coleridge said Mr Miles’ statement was “disappointing but not surprising. It would be good if he were as committed to providing palliative care for the many as he is to providing euthanasia for the few,” Archbishop Coleridge said.

COMMUNITY TV stations C31 Melbourne and C44 Adelaide have received a three-year license extension after an amendment to broadcast legislation was passed in the Australian Senate and confirmed in the House of Representatives. C31 Melbourne has been an essential partner of the Archdiocese of Melbourne and other local faith-based groups during the pandemic, helping communities to stay in touch through free-to-air televised religious services and programs. For Catholics in Victoria, this has included the weekly broadcast of Sunday Mass from St Patrick’s Cathedral since March 2020. FOR the first time in more than a decade, a remote indigenous community in the Northern Territory has a Year 12 graduate. Anthony Carter-Rankine, from Ti Tree – the closest town to Alice Springs – is only the second male in the region to have completed their Higher School Certificate. The Southern Cross Catholic College (SCCC) alumnus also gained a First Aid Certificate, and has secured a job at the Central Desert Regional Council.