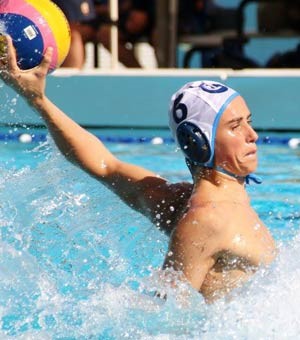 IT’S astonishing what Cronulla’s Danny Kerr will endure for an Italian water polo adventure that money can’t buy. The Australian Catholic University business student has begun a stint at the university’s Rome campus where he will continue his course online and develop skills playing for SC Tuscolano in Italy’s Serie A2 competition. Brushing up on his Italian is a must. Italy’s top flight water polo leagues are professional competitions and he will train with some of the world’s top players at ACU Serie A1 affiliate club Lazio Nuoto. “For a lot of those guys, this is their living. They’re playing to keep a roof over their heads,” Kerr said.

‘A wonderful privilege’ to start from scratch

TURNING a bunch of paddocks and chicken sheds into a first-class Catholic college in Sydney is one of the highlights of Peter Turner’s career. The former director of schools for Wollongong Diocese received the 2021 Br Kelvin Canavan FMS Catholic School Leadership Award. Educated at Marist College, Kogarah, Mr Turner still contributes as a member of the Marist National Schools Council. A highlight of his career was seven years as founding principal of Freeman Catholic College, Bonnyrigg Heights, followed by the same role at Aquinas College, Menai. “The opportunity to start something from scratch is a wonderful privilege to be given,” he said. Every window tells a story

“YOU read it from the bottom up and it tells a story,” Cathedral Guides and Welcomers chair Dr Barbara Reynolds-Hutchinson said, pointing at the stained-glass window of St Stephen’s journey to paradise. A 1999 piece by Australian artist Lance Feeney, it lights up St Stephen’s Chapel, which sits beside its bigger, younger sister in Brisbane’s cathedral precinct. The window tells the story of St Stephen – he looked after widows and orphans, preached the Gospel, was stoned to death and entered paradise. The window was one of many art pieces the Cathedral Guides and Welcomers learned about as part of their training.

Final preparations for the 2021 Australian Catholic Men’s Gathering are being made, with more than 400 participants registered for the event, which launches nationally on ... Read More