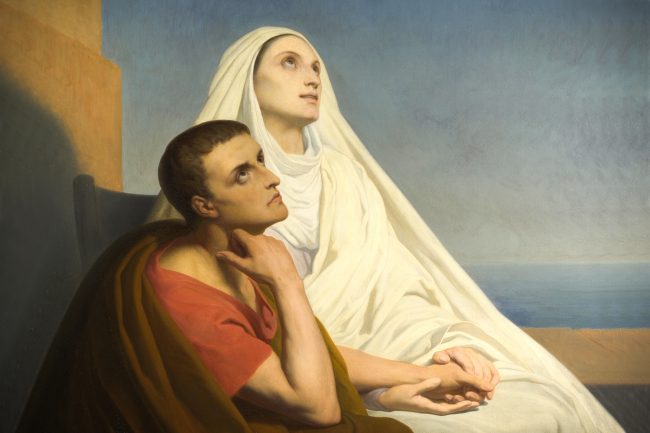 Readers may be familiar with an old office cartoon that depicts a frog being swallowed by a stork. The desperate amphibian whose head is already in the waterbird’s bill has his forelegs clasped around the stork’s neck stopping at least for now his demise. Beneath the picture is the Churchillian caption “Never give up!”

Today’s saint is a living embodiment of the Never give up spirit.

Raised a Christian in last days of Imperial Rome Monica was married early to Patricius a non-believer of violent and immoral habits who refused to allow their children to be baptised. Her oldest son, Augustine took after his father and left their homeland in modern Tunisia to a stellar academic career in Rome and Milan.

The prayerful Monica never knew when to quit and she always modelled the Christian life to her family.

In the end her husband converted before his death and before death her brilliant offspring renounced his immorality and paganism becoming perhaps the Church’s greatest intellect (and a very devoted son).

Monica is an example to all of us of Jesus’ instruction to pray without losing heart (Luke 18).

How prayer works is a mystery to us in this life but that matters little since our instructions are clear.

Who should you be praying for?

Altar of the Poor Clares Chiara Offreduccio (St Clare) was a young Italian woman of noble birth. She gave up all her wealth and privilege ... Read More