Retirement the next chapter for Fr Lachlan Coll 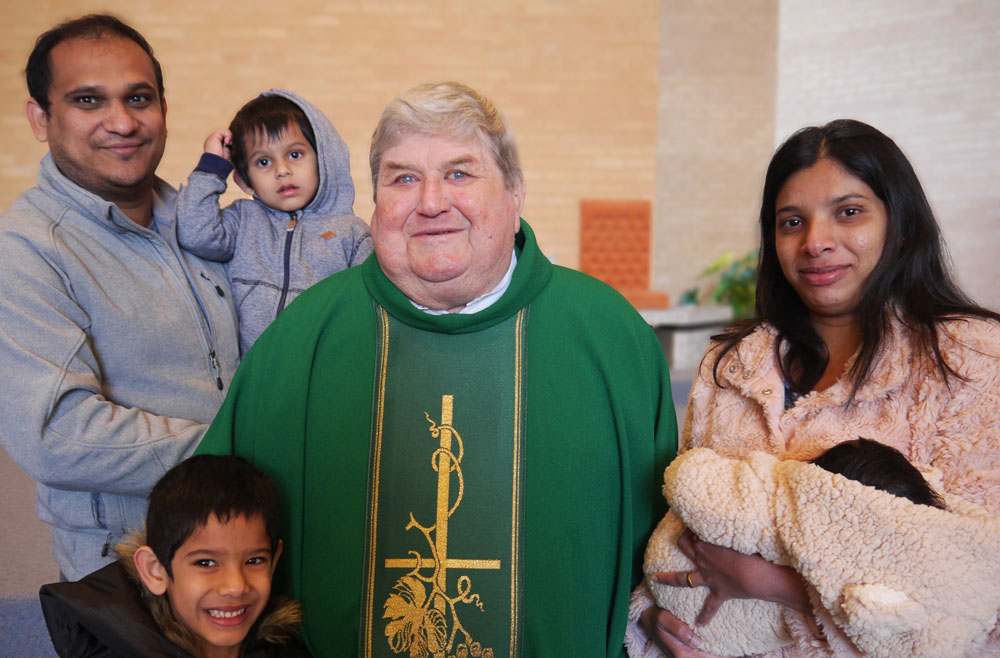 At the age of 79, Fr Lachlan Coll is preparing for the next chapter of his life. Retirement.

Chapter may not be the right word.

For most of us, our lives don’t fit conveniently into chapters. Life is messier than a book, full of overlap and repetition, and the same is true for Fr Lachlan. His life does, however, allow a few clear sub headings.

There is the last 27 years, in which he has been a priest, and before, that the 21 years as a husband.

Having been married, people have sometimes expected “expert status” of him, but Fr Lachlan shrugs off the suggestion and says they are wrong.

“It was sometimes said, especially in my early days, that I’d be a good guy to talk about marriage,” Fr Lachlan explained.

“And I’d say, no. I had a model of marriage that suited ME, but I can’t say what your model should be.

“I might have empathy, having lived with a wife and kids and all of the usual mix of things in a house with kids and teenagers growing up, but I didn’t pretend to have the answers.

“I was happy to talk about it but I never believed I was an expert.”

His is not a unique experience. There are other Catholic priests who have previously been married.

Still, it’s a topic that has come up a lot over the years. But if Fr Lachlan is sick of the topic, he shows no sign of it. It’s part of the open book that is his life.

Not entering the seminary until he was a widower, Fr Lachlan’s was a late calling, although he’d thought about the idea as early as his school days. After his wife Jan died, the thought returned… not as an epiphany or sudden moment of clarity, but rather a process of time and discernment.

“I thought about it while I was still at school, actually. But I met Miss Right, and I married her, and I didn’t think about it for 21 years after that, until she died,” he said.

“Then the thoughts came flooding back, and I went to the parish priest thinking he’d say ‘don’t be silly, go and get married again,’ but he said ‘look, we’ll pray about it… come back in three months.’ ”

“So I did. This went on for, I don’t know, maybe 18 months… I’d go back every few months and we’d pray over it. Eventually he said, ‘I think you better go see the Archbishop,’ and it went from there.”

Even at the seminary, Fr Lachlan’s certainty wasn’t instant. He went to St Paul’s National Seminary for “older blokes” as he put it, and took it a semester at a time.

“I never said I was going to be a priest,” Fr Lachlan clarified.

“I was there at the end of the first semester and I felt I should go back. And I kept doing that for the whole four years. And then I had to make a decision if I wanted to become a priest. Most of us didn’t make a decision until into the fourth year.”

While some believe priesthood is something you are born to, Fr Lachlan takes a different view.

“I think you’ve got to be willing to put yourself forward, to be open to the idea,” he said

Although you’d never pick it from his accent, Fr Lachlan was born in Scotland and emigrated to Tasmania at the age of 10.

Growing up in a mining town on the west coast of Tasmania, he soon learned kids could make life tough for someone who didn’t sound Aussie enough. So he learned the lingo and the accent. Quickly.

Before they married, he and his wife both left Tasmania for the bright lights of Canberra in 1963, marrying at St Christopher’s Cathedral the following year. Having qualified as an accountant in the public service, his work took him and his wife to Papua New Guinea for three years where the first of his three children, Andrew was born. His other two children, Allyson and Kylie, were born in Australia.

On return he worked in various departments, including Treasury, Finance and Aviation.

After the death of his wife, and his subsequent ordination, he began his priestly duties as Assistant Priest at the Cathedral Parish for three years. Then followed six months looking after Barellan before becoming Parish Priest at Young for the next four and a half years.

Next he was an Administrator at St John Vianneys for two years, Parish Priest at Kaleen for six years, and then to his current appointment at St Anthony’s, Wanniassa for the last 11 years.

And, with no disrespect to any other parish, it was Wanniassa where he most felt at home. He’d lived there twice before becoming a priest and then, once appointed there, would often joke that if there was no Heaven, it was because he was already there.

“It’s a lovely lot of people and I got on very well with them,” he said.

“I’ve seen kids go right through the primary school and almost right through high school … they start out tiny and then their towering over me by the time they graduate.

“It’s been a good life and everyone treats me well. We’ve got a lot of good groups in the parish.”

Fr Lachlan clearly loves the place and his role in it. So why retire?

“It just felt like time. It’s a good life, and I enjoy, but it’s like anything else… you know in yourself when it’s time to go,” he said.

“I’m starting to feel it body wise – fortunately I think I’m alright up here” he says as he points to his head.

“Well I think so anyway. Maybe others might disagree.”

Of course retirement looks a little different for priests. Fr Lachlan will still assist with the supply of Masses, but he says he has benefitted substantially from the assistance of other priests over the years and looks forward to returning the favour.

But most exciting for him is the chance to spend more time with his children and grand-children.

“They’ve always got behind me, but I think they’re happy I’m retiring so I can spend more time with them,” he said.

“It cost them dearly in a sense because I couldn’t always be there and financially they probably missed out as well.  I think it’s fair to say I was getting better paid in the public service.

Thus will close the chapter. His book,however, continues.

CRA has joined 80 national and state organisations, five political parties and many independent candidates in signing a Statement against Forest Bioenergy. Read More