St Joseph: a look below the surface of a great saint 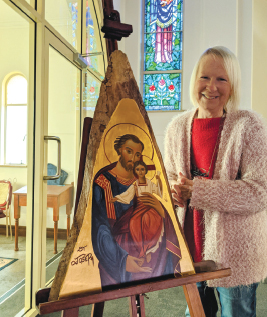 Iconographer Sue Orchison with her icon of St Joseph and the child Jesus which is on the sanctuary of St Anthony’s church, Harden.

THERE’S a lot to love about St Joseph, patron of the universal church and numerous causes, stand-in father, husband, carpenter, superstar! In his apostolic letter to mark this the Year of St Joseph, Pope Francis labelled the saint as beloved and tender, loving, obedient, accepting, courageous – a “hidden presence”.

The “hidden” St Joseph resonates with many, including Canberra parishioner Joe Clark. Joe was named after the saint whom he describes as “hidden love”. But what’s below the surface of this unseen St Joseph?

Dr Joel Hodge, a senior lecturer in theology at the Australian Catholic University, said St Joseph was foremost a man and father.

“He was ordinary in many ways like us but discerned and acted on God’s will for the good of his family,” Joel said. This idea of the discerning St Joseph is also underlined by a US theologian, Fr Matthew Spencer, who also said St Joseph’s fears and anxiety did not imply a lack of faith or trust in God’s plan. They were, rather, “the human response to danger and difficulty in the world,” he said.

For Robert Falzon, a husband, father and co-founder of menAlive, these difficulties for St Joseph would have hit hard: his betrothed was apparently pregnant to another man.

“What going on? I’ve paid the dowry and she’s left me!”

As we know, the angel intervenes to allay St Joseph’s concerns but it’s the saint’s initial reaction to Mary’s pregnancy that gives us a window into Joseph’s human side.

Robert suggests this invites us to use our imagination, along with the scriptures, to understand St Joseph and his fears.

Those fears would have been so evident when the young Jesus went missing for three days – why wasn’t I there to protect him, to hold him tight?

Or they would have been part of the emotional parcel that all fathers have – am I a good husband, how can I be a better dad?

Fr Matthew says the fact St Joseph would have experienced these fears does not undermine his holiness.

For us, encountering St Joseph in his special year, in all his faith and his fears, is not to weaken his halo – but to strengthen it. We glimpse Joseph the man, to celebrate St Joseph the great saint.