The dementia-friendly parish: a commitment to justice, mercy and life 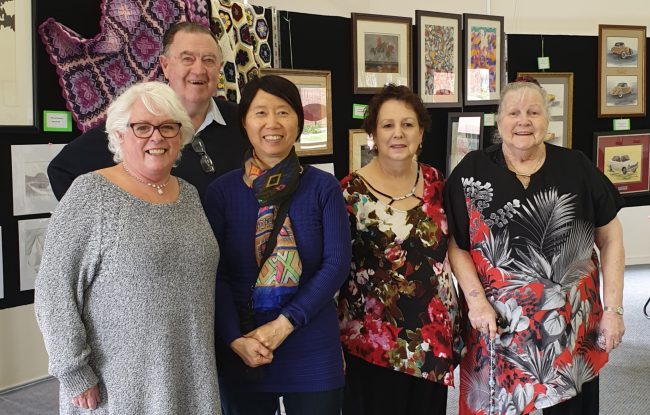 Parishioners using art and craft as a way for a community response to promoting health and wellbeing.

Nothing touches whole families and communities like dementia. In Australia, it is the second leading cause of death, with numbers expected to increase to 590,000 by 2028. While elderly people are more predisposed to the condition, dementia can affect anyone, even young people.

At the beginning of the new liturgical year, 2019-2020, the parishioners of St Clement of Rome in Bulleen made a bold, conscious and courageous commitment to being a Dementia Aware and Dementia Friendly parish.

This commitment arose from experiences arising from pastoral visits to the sick and elderly and their families. Many stories told of the struggles and human vulnerability of those directly struggling with dementia and Alzheimer’s and the ripple effect these conditions have on carers and others in the community.

All stories and experiences, when reflected on deeply, prompt the head and heart, and the catalyst to change in this case was provided by Mgr Franco’s own sharing of his personal experience with the illness. Over four years, Fr Franco visited his severely demented mother Giovanna every day at the Assisi Nursing Home in Rosanna, to feed her and to provide pastoral care to the other residents. From his and other stories, it became clear to Mgr Franco and the pastoral leadership team that an urgent pastoral response to dementia was needed.

The work of researching, educating, questioning, dialoguing and praying—all essential elements for focused pastoral planning—took two years. Plenary 2020 came at a most opportune time and further affirmed that here was a way of listening and responding to the call of the Spirit in real terms. The Royal Commission into Ageing was another opportunity to conscientiously work on delivering a pastoral programme where compassion, mercy and respect for all life can slowly emerge, beginning with this one specific issue. Pope Francis has previously stated that dementia sufferers often “become victims of maltreatment and abuse that trample their dignity.” The Royal Commission into Ageing has affirmed this fact. The Holy Father inferred that given the elderly are predominantly affected by the condition, the Church must care for them as they are also “the present and the future of a Church that, together with the young, prophesies and dreams!”

By committing to being a Dementia Aware and Friendly Parish, the people of St Clement are making a commitment to mercy, justice and life, not only for those afflicted with the condition but their families, the young people and those within the Manningham District. Engaging the wider community via the Council is a crucial part of the parish’s pastoral response and the Manningham Council was involved in supporting the Parish with resources and advice, specifically in the education of people through being Dementia Friends.

In his recent Post-Synodal Exhortation Christus Vivit, Pope Francis strongly encourages relationships between the young and the old (cf. #187-201). “Without the latter generations, the young cannot dream!” He further cautions that initiatives such as the one St Clement of Rome Parish has committed itself, “need to change … pastoral habits in order to respond to the presence of so many older people in our families and communities.” Changing pastoral habits is difficult and takes time. However, if Jesus’ call to justice, mercy and life is to be taken seriously, then a course correction is necessary every so often.

The fledgling Youth Ministry and the young children of the school, all staff and parishioners are instrumental in this initiative. The same goes for the delivery of liturgies, worship, the education and faith formation programs of the school and parish. The goal is to listen, to dialogue, to reflect on how, why and what needs to be done creatively, consensually and communally, in order to become a truly Dementia Aware and Friendly Parish not only in name but also in action.

To date, a schema for ‘a journey of pastoral deepening and discernment’ is in place. To this end, the people of God in Bulleen can take encouragement from the words of the Holy Father, “Do not be afraid. Do not be afraid. Take initiatives. Help your Bishops and Dioceses to promote pastoral service to, and with the elderly. Do not be discouraged … Go forward!”