How we address our priests Like the patriarchs, a priest is meant to be a father to his people.  What’s wrong with calling him that?

There has been a push towards addressing priests by their first name, and not ‘Father.’  A recent article by New Zealand Cardinal John Dew summarised the issue so succinctly that it is a good impetus for discussion.

In an earlier newsletter, Cardinal Dew wrote that after reading an article by French Priest Father Jean-Pierre Roche, he now wonders why priests are called “Father,” and, following Father Roche’s line of argument, gave three reasons why addressing priests as “Father” should perhaps be a thing of the past.

Firstly, His Eminence mentioned Christ’s exhortation in St Matthew’s Gospel to not call anyone on earth ‘Father’ (Matthew 23:8-9) and said that this usurpation of the place of God can sometimes lead to clericalism.

Secondly, he said calling priests “Father” indicates a parent-child relationship. “It is not possible to have equal relationships between adults who are brothers and sisters if we call one of them “Father”, he wrote.

Finally, Cardinal Dew said the practice can be unhealthy because “it becomes an expression of dependence which is based on a false and unreal idea of obedience.”

With due respect to the Cardinal, and to the many priests who agree with him, I would like to provide three reasons why the practice should be maintained.

Firstly, it holds a level of formality that is more important in our times than it has been previously.  For those who listened to the testimony at the Royal Commission, too many perpetrator priests would groom not just children but families by trying to behave like just another member of the family.  The formality was replaced by a sense of familiarity, making it easier for them to prey on vulnerable children.  Maintaining the title of “Father” is one way to create a separation between the priest and layperson where such familiarity is less likely to occur.

Unfortunately, a number of those at the Royal Commission characterised titles, clerical dress and other “formalities” as signs of a “clericalism” that contribute to a culture of abuse rather than protecting against it, and I think this was incorrect. Sometimes, formality helps.

However, the title of ‘Father’ is a reminder to the priest of his role.  I agree with Cardinal Dew that using the title “Father” can indicate a parent-child relationship, but this is less about the exercise of authority by the priest and more about the solemn responsibility he has to care for those entrusted to him.

In a parent-child relationship, the parent must be the protector and, if needed, lay down their lives to keep children safe.  So too with a priest; addressing him as “Father” is a constant reminder of this.

I have known some priests who refuse to let any member of the faithful call them “Father.”  To me, this isn’t a sign of friendship or equality, but a rejection of a relationship to which the faithful have a right.

Finally, it better reflects reality.  Calling a priest “Father” is not an honorific; it is his identity.

If a priest prefers to be called by his first name, then I will happily do it out of respect.  In the same way, if I were ever to meet Bruce Jenner, and he insisted on being called “Caitlyn,” then I would honour that request.  Not because it reflects reality, but Bruce’s identity crisis is not going to be fixed by my persistence.  In truth, though, Bruce is no more Caitlin than Cardinal Dew is simply “John.”

Monica Doumit works for the Archdiocese of Sydney. This article was first published in The Catholic Weekly. 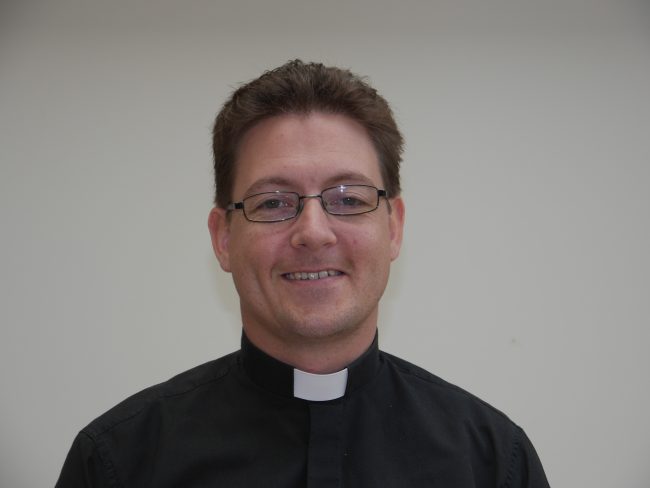 I’ve been called many things since being ordained in 2015, but in all seriousness, when considering the issue of how priests should be addressed, I realised how heartening and identity affirming being called ‘Father’ actually is.

I have never understood the address ‘Father’ to be functioning as an ‘honorary title’ or suggesting a subordinating relationship; in fact, such an idea saddens me immensely.

It seems so often nowadays, more than ever, we equate equality with sameness.  But even Saint Paul writes “There is one body, but it has many parts. But all its many parts make up one body.” (1 Cor 12). That is we all play different, necessary roles in Christ’s one Body.

I would be confident in saying that when I hear ‘Father’, it is a gentle reminder that it is not about me.  It is not ‘Trenton’ people are seeking, commending or even trusting.

If someone isn’t comfortable using the title ‘Father, that’s up to them.  People have different reasons.  However, I would never deny that this is, in fact, my identity, responsibility and life.

‘Father’ is more than anything, a reminder to the priest that he does have the spiritual care of people now as his daily focus – to go as far as a father would go for their child, to secure their happiness, comfort and soul for the One to whom it belongs.

Holy Spirit Parish- Amaroo, has gone the extra mile in thinking outside the box and promoting spirituality in their parish, by bringing people together through ... Read More