As the new Archbishop made his “humble request for entry” into St Christopher’s Cathedral, the name he shares with the seat of his Archdiocese emerged as much more than a happy coincidence.

“It is Christopher knocking on the cathedral door of St Christopher’s,” Archbishop Christopher Prowse said at his liturgical installation in Canberra.

He then proffered himself as “Christopher” in more than name only to the people of this Archdiocese.

“I want to carry you and your burdens to Jesus, the great burden-bearer, across the dangerous river of life,” he said, having explained the story of his namesake saint, who carried a child he later learnt was Christ through raging waters.

The Archbishop then suggested the people of the Archdiocese could share his name as “a metaphor for missionary discipleship”.

“In these burdensome times, let the ‘Christopher’ in each one of us truly believe that in Jesus alone the yoke becomes easy and the burden light.”

This offer was witnessed by more than 700 guests in the cathedral as well as more than 2000 online viewers, including schools, groups and individuals from 35 countries, who accessed the archdiocesan live stream of proceedings.

Among the guests were ambassadors and high commissioners, politicians, heads of churches, Apostolic Nuncio Archbishop Paul Gallagher, and about 30 Catholic bishops, including the immediate past Archbishop of Canberra and Goulburn Mark Coleridge and Cardinal George Pell.

Also present were more than 130 clergy from the Archdiocese of Canberra and Goulburn, Melbourne Archdiocese and Sale Diocese, leaders of religious communities, representatives of parishes, schools and Catholic organisations and communities, and Archbishop Prowse’s friends and family.

Having “knocked” at the door of the Cathedral and been received by Archdiocesan Administrator Mgr John Woods, Archbishop Prowse heard a public reading, in both Latin and English, of the Papal Bull of his appointment.

The letter from Pope Francis confirmed that the then Bishop of Sale was “best suited to fill this vacancy” in Canberra and Goulburn thanks to his “well recognised and much esteemed spiritual and pastoral gifts”.

The Apostolic Nuncio then “installed” the new Archbishop in his cathedral, or chair of office, before representatives from the Archdiocese’s laity, religious and clergy filed up to welcome their “servant-shepherd Archbishop”, as he referred to himself.

Members of Archbishop Prowse’s family brought forward the offertory gifts during a Mass with all the dignity and warmth the occasion demanded, ending in a crescendo of Handel’s Halleluia Chorus from Messiah.

Soon after the ceremony, the Archbishop was to be found on the steps of his cathedral, talking to the media, as he will many times during his tenure, about “demonised” asylum seekers, the role of religion in society, and issues around marriage and family.

Then he was free to mingle with the faithful, who had waited patiently outside to meet the man for whom the Archdiocese has been waiting for 18 months. See footage and highlights of his homily here. 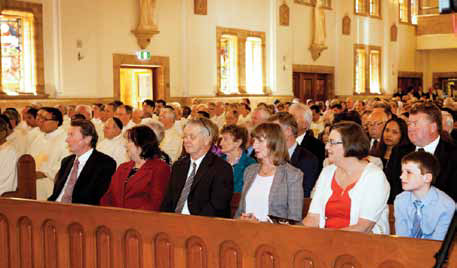