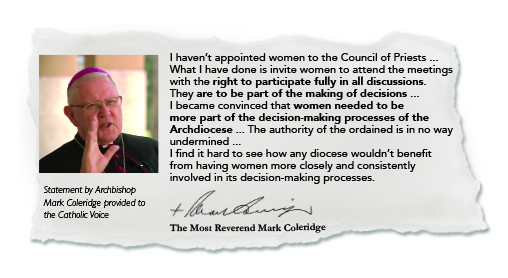 A lay woman has joined the Council of Priests in Brisbane in what is believed to be a first for the Australian Catholic Church.

In a move to boost women’s decision-making powers, Archbishop Mark Coleridge has invited former ABC journalist Cathy Uechtritz to join him, his Vicar-General and 20 priests and deacons on the council.

The key decision-making body represents the clergy in a diocese and advises the Bishop.  In Brisbane it meets every two months.

In a statement to the Catholic Voice, Archbishop Mark said he was convinced women needed a bigger decision-making role in the church.

And the former Archbishop of Canberra and Goulburn, and current President of the Australian Catholic Bishops Conference, revealed he had also invited two women to join the College of Consultors, which is a smaller group of priests advising the Bishop.

“It is up to other dioceses to make their own decision but I find it hard to see how any diocese wouldn’t benefit from having women more closely and consistently involved in its decision-making processes,” Archbishop Mark said.

“The Archbishop introduced me and said the reason Cathy is here is because she is a woman and a wife and a mother and a grandmother and everything people sitting around this table have no idea about.”
New Council of Priests member Cathy Uechtritz

Cathy, 59, who joined Archbishop Mark as Director of Government Relations last June, said she was “a bit stunned” when he invited her to join the council.

“I said, ‘I’m not a priest’,” she told the Catholic Voice.  “Then he gave his reasons for inviting me.

“At my first meeting I was a little intimidated.  The Archbishop introduced me and said the reason Cathy is here is because she is a woman and a wife and a mother and a grandmother and everything people sitting around this table have no idea about. 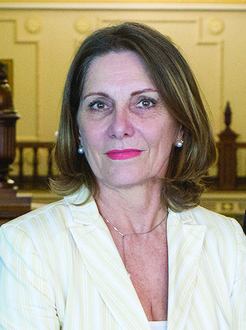 “I feel very humbled.  It is significant.  It shows that women have a voice.

“The most interesting thing for me is that we are being listened to now, more so, perhaps.  I see this as a great opportunity not just for me but for the clergy and the whole church.

“I am not just visiting and reporting on the meeting but have been appointed as a member which is pretty amazing.  My role is to see issues from a different perspective than what the priests do.”

Archbishop Mark said Cathy had the right “to participate fully in all discussions.”

In his statement, he said: “I decided to do this because I became convinced that women needed to be more part of the decision-making processes of the Archdiocese, and even at this early stage I would say that the move has shown its worth.”

Minutes of a Council of Priests meeting sent to the Catholic Voice state that the Archbishop would invite Cathy to be appointed a member of the council, but Archbishop Mark denied she had been appointed.

“I haven’t appointed women to the Council of Priests or the College of Consultors,” his statement said. “That would be impossible, since by Church law all appointed members of both bodies must be clergy.

“What I have done is invite women (two in each case) to attend the meetings of the two bodies as observers, but with the right to participate fully in all discussions. Statement by Archbishop Mark Coleridge provided to the Catholic Voice

Archbishop Mark said clergy authority would not be undermined.

“The authority of the ordained is in no way undermined but is set within a larger and more ecclesial context in which that authority can be better exercised,” he said.

Cathy told the Catholic Voice that a religious sister, Sr Moya Campbell, had been on the Council of Priests but had recently moved to New Zealand.

“I’m the only woman sitting at the table.  The Archbishop wants everyone around that table to get how I see things from my prism, as a woman and wife and mother and so on.  He trusts me.

“Everyone has been very open-minded.  I have been absolutely welcomed.

“The Archbishop and priests ask my opinion on stuff particularly around public thought and engagement.

“I am incredibly fortunate to be working with this Archbishop and in this Archdiocese.  I have great respect for Archbishop Mark.  He’s an incredibly progressive Archbishop, very strategic and clever to think that way.”