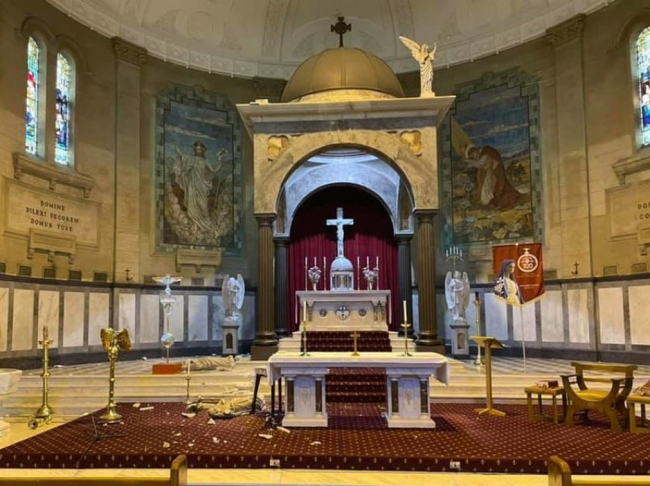 St Mary’s Ascot Vale and Chaplain to the Lithuanian Community.

I thought get out of here now’

FR JUSTIN Ford was in the middle of Mass at Melbourne’s St Mary’s Ascot Vale when he felt the tremors of Victoria’s 5.9 magnitude earthquake. He had just taken Communion and “everything was shaking”, he said. “Then I started to hear another noise. I just thought, ‘get out of here now’.” He ran to the sacristy and heard a loud crash from inside the church as two marble statues fell 7m. “One of the statues that fell knocked off the head of another angel at the back of the sanctuary,” he said. The other statue fell towards the side of the altar, near where he would have been standing. The statues are more than 80 years old and were imported from Italy in the 1930s.

ARCHBISHOP Anthony Fisher OP is inviting Catholics to show their support for a culture of life in NSW at the inaugural March for Life Mass, livestreamed on Sunday 26 September from St Mary’s Cathedral. The Mass is being held to coincide with the date two years ago when the NSW parliament passed the Abortion Reform Act, allowing for abortion up to birth in NSW. ‘One foot on earth, one in heaven’

QUEENSLAND’S longest-serving priest Fr Lino Valente has died aged 93. Newly-retired Stanthorpe parish priest Fr Brian Connolly said Fr Valente was “an exceptional priest” who had left the world all the richer. Fr Valente was ordained in St Mary’s Church, Warwick, on 29 June, 1954. The much-loved priest baptised hundreds of Granite Belt locals, officiated their marriages and baptised their children. Fr Connolly told The Catholic Leader that “Lino lived with one foot on the earth and one in heaven”. In 2014, to mark his 60 years as a priest, the then 86-year-old recounted childhood experiences of “Mass in a shed once a month with about a dozen others”. Against the backdrop of gum trees in the west parklands, Adelaide Archbishop Patrick O’Regan signed the National Park City Charter on behalf of the Catholic community. Green Adelaide is making a bid to have Adelaide declared the second National Park City, which recognises community efforts to improve a city’s liveability through a better connection of nature and people. In 2019, London became the first city in the world to receive this honour.

SYDNEY’S homegrown order  Our Lady’s Nurses for the Poor has gathered to mark the passing of their foundress, Servant of God Eileen O’Connor a century ... Read More

NEWER POSTArchbishop Gallagher at UN: ‘Racism can and must be defeated’
OLDER POSTCooma’s silver lining to lockdown