YOU wouldn’t expect to see prayer making international news headlines, but then there was nothing ordinary about the story of four-year-old Cleo Smith from Carnarvon whose disappearance had the world storming heaven. When she was found alive and well 18 days after her abduction, it was hailed a miracle and an answer to prayer. Fr Steve Casey, parish administrator at St Mary’s Star of the Sea at Carnarvon, said that he had never prayed so hard and would offer the next Sunday Mass in thanksgiving for the little girl’s safe return. “The good news is that she is found, and it’s brought the whole community together, it’s brought the whole world together,” he said. 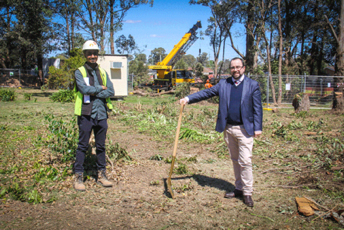 AUSTRALIA’S pioneer liberal arts college is set to grow, with the launch of the first stage of construction of a new academic wing. The $18.5 million project at Campion College in Sydney’s west will greatly boost the college’s student capacity and educational facilities, and further establish it as the country’s premier institution of learning in the tradition of western civilisation. The first stage of construction will focus on a new academic wing, including a two-storey library, lecture theatres and classrooms, as well as a large dining hall which will double as an event space.

EIGHTEEN Catholic dioceses and religious orders have injected almost $170m into the Church’s insurance company to help pay reparations for abuse by priests, religious and lay people. Catholic Church Insurance has recorded massive losses – $192.3m last financial year, and nearly $250m in 2019. Australian Catholic Bishops Conference president Brisbane Archbishop Mark Coleridge said: “The recent work we have undertaken together means we can assure the Catholic community and wider public that survivors of historical abuse will be treated justly, with no impact on compensation arrangements.”