Parishioners came together on Sunday August 5 to celebrate the 50th anniversary of the foundation of the Parish of St Vincent de Paul, Aranda. Photo supplied.

On Sunday August 5, the Parish of South Belconnen celebrated the  fiftieth anniversary of the foundation of the Parish of St Vincent de Paul, Aranda on August 3, 1968.

The anniversary was celebrated with a special Mass and was followed by a ‘bring and share’ lunch in St Vincent’s School hall which was attended by about 150 parishioners.

The school hall has a special place in the lives of early parishioners as Mass was celebrated there from the time the school opened in 1970 until St Vincent’s Church was completed in 1982. The hall was the place where the children of the parish were baptized, received their first Eucharist and were confirmed.

The great spirit of camaraderie and friendship formed by parishioners was evident on the day. Over those 50 years, many had worked together to build both a church building and caring community, as well as a school. Many of the foundation parishioners are still resident in the parish and continue to contribute generously of their time and efforts in making the community very welcoming and caring.

The presence of so many current parishioners, many of whom are recent arrivals from countries that include Korea, India, Africa, the Philippines, Indonesia, Malaysia, Sri Lanka, Germany, Poland and Spain, at the lunch was wonderful as it gave us all the opportunity to spend time socialising with our more recent parishioners as well as old friends.

The spirit present at the celebration of this momentous occasion bodes well for our future as we continue forward as the Parish of St Matthew’s and St Vincent’s South Belconnen. 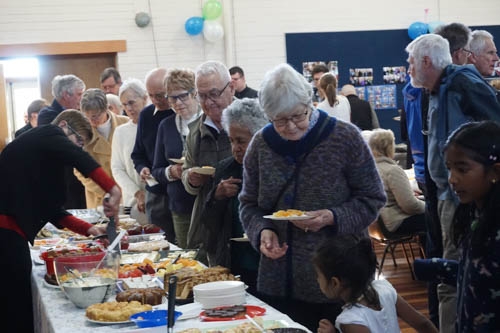 Crace resident Dr Ray Storrier, says he was both honoured and humbled to be recognised in the 2018 Australia Day honours list. Read More