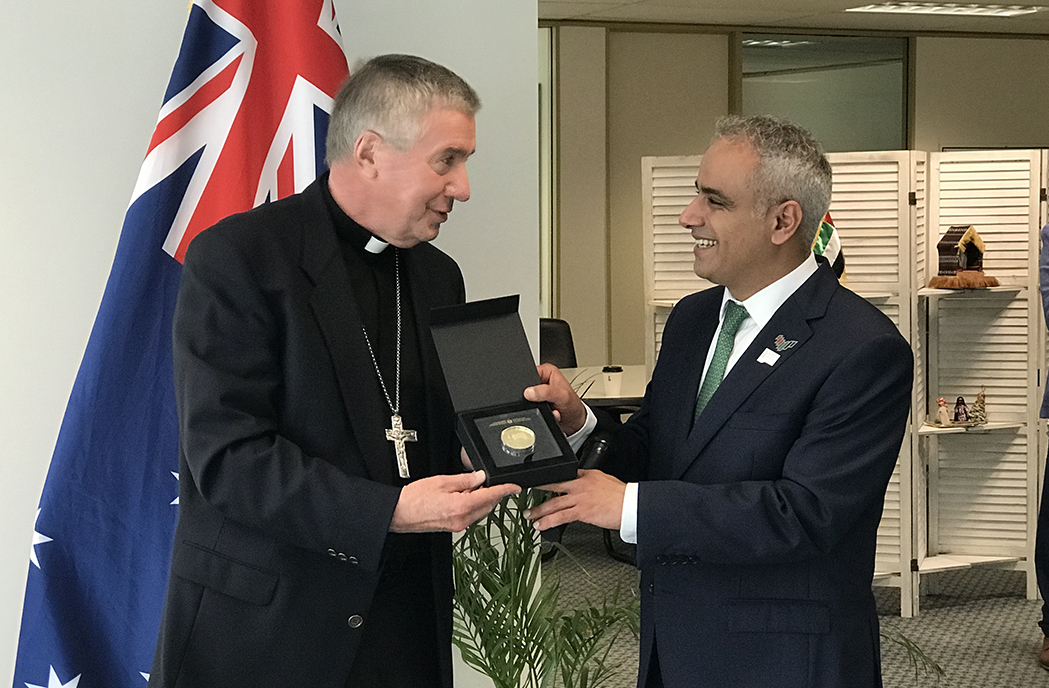 At the beginning of February 2019, Pope Francis paid a historic visit to the United Arab Emirates. For the first time, a Catholic pope set foot on the Arabian Peninsula.

Pope Francis and the Grand Imam of Al-Azhar met in Abu Dhabi to sign the Document on Human Fraternity—a joint statement calling for the reconciliation of people of goodwill in service of universal peace.

To mark International Tolerance Day, the Embassy of the United Arab Emirates to Australia invited Archbishop Prowse to share his thoughts on this document’s significance for building international tolerance.

Commending the initiative of Ambassador Abdulla Al-Subousi, Archbishop Prowse said that “if we want to work for global peace, we need to act locally.

“That’s what we’re doing here right now. I want to commend all the ambassadors here and their representatives. There is something practical happening here with the representation of so many religions.

“Global peace begins with friendship. Not sentimentality but genuine friendship, which I can see coming from you, dear Ambassador. It is incredible that you, representing the United Arab Emirates comprising mostly Muslims, have invited me, a Catholic Archbishop, to speak about a Papal document in your Embassy. That’s a wow moment.”

Archbishop Christopher also referred to the religious discrimination bill being debated in Parliament and how timely it was to discuss and reflect on the importance of religion in world peacemaking.

“The enemy of fraternity is individualism which translates into the desire to affirm oneself and one’s group above others,” he said. “We see this here in Australia. Today, at Parliament House, the debate about religious discrimination, religious freedom is taking place. So this topic is very present in Australian society.”

Archbishop Christopher said Australia was one of the most multicultural countries in the world.

“People forget that the glue between the cultures in Australia is religion,” he said. “We dumb it down. But here we are today, saying that if there is a social friendship between us, one that recognises our differences, then we are in a much better place to work towards peace.”

The inaugural local gathering was one of warmth and friendship, with both leaders expressing a desire to continue dialoguing and reflecting on the document into the future.

Ambassador Abdulla Al-Subousi expressed his enthusiasm saying that Archbishop Prowse had been “a champion in his support of the document.

“I hope other Archbishops will follow what we are doing here today. I believe the more we study the document, the more we remind ourselves of it, the more it will spread and enshrine itself.”

The largest primary school carnival in NSW was held at the Boorowa Showgrounds on Friday October 25. Read More