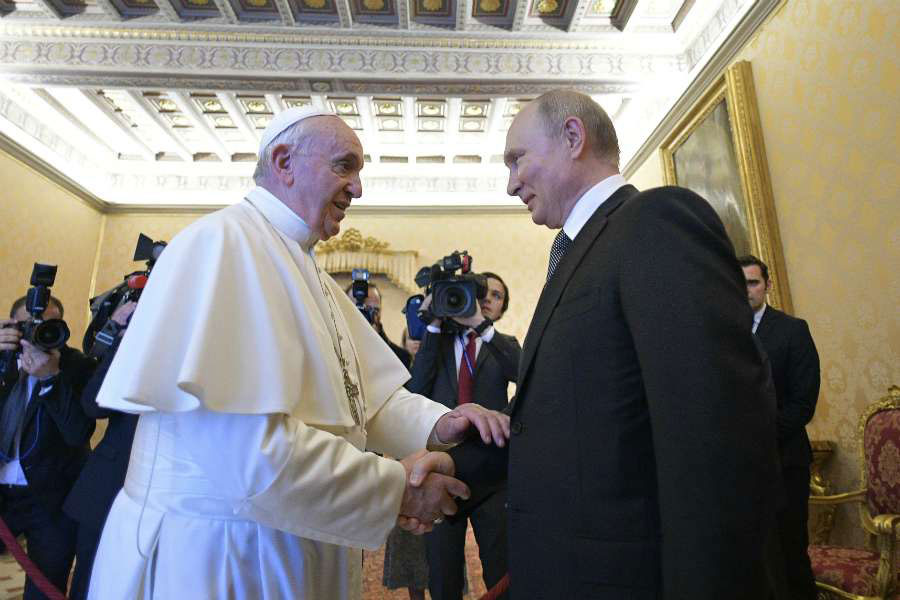 Pope Francis and Putin discussed current affairs in Syria, Ukraine, and Venezuela, as well as environmental issues and questions concerning the Catholic Church in Russia, according to the Holy See Press Office.

“Thank you for the time you have devoted to me,” Putin said after his audience with Pope Francis in the Vatican’s Apostolic Palace.

It was Putin’s third meeting with Pope Francis and fifth visit to the Vatican. The Russian leader arrived nearly an hour late for his meeting with the pope, as he did for both of his prior meetings with Francis.

Putin also briefly spoke with Cardinal Secretary of State Pietro Parolin and Archbishop Paul Richard Gallagher, Secretary for Relations with States during his time at the Vatican.

The day before Putin’s visit Pope Francis expressed his condolences and closeness to the families of the 14 Russian sailors who died when a deep-sea submarine caught fire in an Artic port July 2. Russian officials confirmed that the top-secret submarine was nuclear-powered less than one hour before the papal audience was scheduled.

“The Holy Father was informed of the Russian submarine tragedy. It expresses its condolences and its closeness to the victims’ families and those affected by this disaster,” Holy See press office interim director Alessandro Gisotti said July 3.

The Russian Ambassador to the Holy See Aleksandr Avdeev said ahead of the meeting that he expected Putin and the Roman pontiff to discuss “the instability of international relations, the crisis in the Middle East, the fate of Syria, the problem of nuclear disarmament, the situation in Iran.”

“The time has come when Catholics can no longer solve many problems and open challenges, without taking into account the political logic of Russia and the experience of our Orthodoxy,” Avdeev said in an interview with Ogonek, a Russian magazine.

Ukrainian Catholic Archbishop Svyatoslav Shevchuk of Kiev, along with other leaders of the Ukrainian Greek Catholic Church, are scheduled to meet with Pope Francis and Vatican officials later this week.

At Putin and Pope Francis’ previous meeting in June 2015, Pope Francis asked Putin for “sincere and comprehensive effort to achieve peace” in Ukraine after Russia annexed Crimea one year prior. Their first meeting in November 2013 focused on the Syrian civil war.

Following his visit to the Vatican, Putin will meet the Italian president and prime minister during his one-day trip to Rome.

Putin met with Pope John Paul II in 2000 and 2003 and had an audience with Pope Benedict in 2007. The Holy See and the Russian Federation re-established full diplomatic relations in 2009.