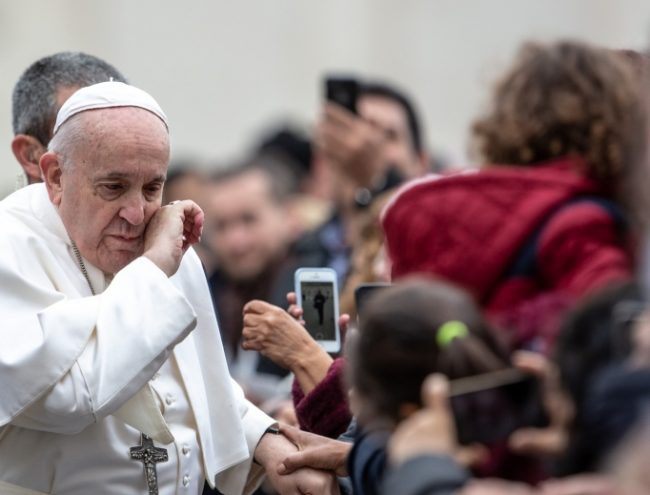 Pope Francis, who is 83 years old, is generally healthy, though he suffers from sciatica and had eye surgery for cataracts last year.

VATICAN CITY — Pope Francis did not attend a scheduled meeting with Rome priests Thursday morning due to a “slight indisposition,” a Vatican spokesman said.

The pope’s other appointments took place as usual Thursday; he offered his morning Mass in the chapel of the Casa Santa Marta guesthouse and later met with members of the Global Catholic Climate Movement.

“Due to a slight indisposition,” Pope Francis “preferred to remain in the rooms close to Santa Marta,” Matteo Bruni, Holy See press office director told journalists Feb. 27. Santa Marta is where Francis lives at the Vatican.

Bruni added that the pope’s “other commitments proceed regularly.”

The encounter with Rome’s priests was to take place as part of a penitential Lenten liturgy at the Archbasilica of Saint John Lateran across Rome.

In his absence at the liturgy, the pope’s prepared remarks were read to clergy by Cardinal Angelo De Donatis, the vicar general of the Diocese of Rome.

Pope Francis, who is 83 years old, is generally healthy, though he suffers from sciatica and had eye surgery for cataracts last year. When he was young he had a portion of one lung removed because of an infection.

The pope had a full schedule Feb. 26 with a procession and the celebration of Mass for Ash Wednesday, which marks the beginning of Lent, as well as his weekly general audience held in St. Peter’s Square.

ope Francis’ illness comes at the same time as the novel coronavirus afflicts several hundred people in Italy, mostly in the north.

During the audience, Pope Francis expressed his closeness to those who are sick with the novel coronavirus, Covid-19, and with the healthcare workers tasked with treating them and with stopping the contagion.

As of noon, on Feb. 27, cases of coronavirus in Italy had reached more than 500, with 14 deaths. In Rome’s region of Lazio there have been just three cases: an Italian who has recovered and two Chinese tourists who are being treated in the hospital.