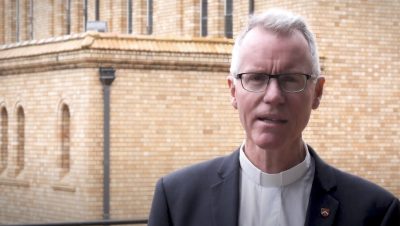 There appears to be no limit for Fr Tony Percy when it comes to turning a vice into a virtue.

The archdiocese’s Vicar General was recently fined for speeding at 47kmh in a 40kmh zone on Canberra’s Northbourne Avenue.

That particular section of the major arterial road into the city centre has been controversial with many Canberra drivers caught out by a drop in the speed limit from 60 to 40kmh.

In Fr Percy’s case, rather than cop the fine, he wrote an open letter to the ACT government with a unique proposal.

Drop the penalty, he said, and he’d donate the money to MacKillop House, a residential facility for 26 woman and their children experiencing homelessness.

And, just like that, the government did. With little explanation, it waived the fine for “technical reasons”.

As The Canberra Times noted, the ACT government, like God, moves in mysterious ways.

The outcome was welcomed by Anne Kirwan, CEO of CatholicCare Canberra & Goulburn, the agency that operates MacKillop House.

She commended Fr Percy for his initiative, noting “any diversion of funds to the homeless is welcome”.

The Vicar General hopes his actions might be the catalyst for greater efforts to assist the disadvantaged.

In his open letter he called on the ACT government to “let all those who have paid over $5million in speeding fines for driving along Northbourne Ave know of this wonderful opportunity to help those in need”.

A life committed to social justice

The Chairman of the Archdiocesan Catholic Social Justice Commission (CSJC), Mike Cassidy, is about to step down, about to pull up stumps, about to retire. ... Read More

NEWER POST‘Quick and painless’? Pull the other one.
OLDER POSTSay a prayer of gratitude in recalling all souls and all saints