Purposefully gathering on the Feast of St Bernard, parishioners past and present marked the occasion by celebrating Mass before indulging in a luncheon prepared by the social committee and the Filipino members of the parish.

Representatives of the various local Church communities attended the luncheon as did the the original building committee and tradesmen who had worked on the building during its construction stage.

Younger members and those considered “young at heart” took part in a host of activities namely rock and roll golf and the bouncing castle.

Parish Priest Fr Martins Aloga and assistant priest Fr Dominic Byrne concelebrated the Mass with deacons Don Nguyen and Paul Rummery assisting on the sanctuary and at the altar.

In a sense of deja-vu, long-time parishioners Michael and Christine Lowe read the readings just as they did during the first Mass at the site in February 1987.

The gifts were taken up to the sanctuary by three generations of the O’Sullivan family who have been resident and active in the parish for many years.

Long-time parishioner Anne Jackson said the official opening of the ‘new’ church in 1987 was on May 24 – the Feast of Mary Help of Christians and was largely accomplished through the foresight of their former parish priest.

“The parish appreciates Fr Henry Byrne OAM (Parish Priest 1983-2003) for his vision for the parish of the church, convent and school along with Maranatha Lodge at Batehaven,” she said.

“He took the vision to reality with a group of talented and dedicated parishioners who were generous with their time.

“The new church and the presbytery brought all the parish facilities to the one area and these days we even have a Men’s Shed.

“Prior to this there was a smaller wooden church, also called St Bernard’s, in the main part of Batemans Bay.” 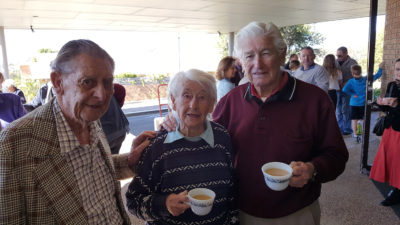 For Deacon Paul Rummery of Tuross Heads, his life changed for ever on the evening of Friday December 21 as he and his wife Jo ... Read More