Through God and ancestors, Wendy’s brush does the talking Wendy Rix says it can strike at any time.

For this contemporary and Christian indigenous artist, inspiration can come from anywhere, anytime.

All she and her family know is that it’s best to have the quill handy before the brush.

One day mother and daughter were in church together when Wendy experienced that sudden bolt. “Paper, pen, paper, pen,” she said quickly.

The tools were found and the creative thought was preserved to find its way into one of Wendy’s paintings. Wendy lives in Brisbane but her family is from Goodooga in northern NSW. She’s a descendant of the Yuwaalaraay people of that area.

Most of her work is commissioned, especially from schools where there is strong demand for indigenous art.

Her paintings appear in schools in the Canberra and Goulburn archdiocese and she’s a regular visitor to the national capital where she has family.

Help from above plays a big part in getting the work from thought to canvas. “So I lie quietly and pray and then I just paint,” she said.

Christian themes appear in many of her paintings and that aspect came with a challenge at first. Could she reconcile her indigenous heritage with her Christian beliefs? 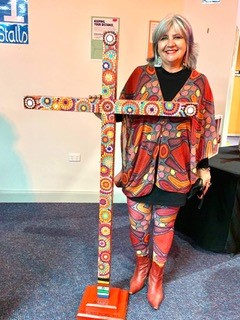 So she consulted one of her elders who said it was okay to believe in both.

“That came as a relief”, she said. “I can’t speak for other indigenous mobs because they have their own stories. But I know now I can still be true to me and be true to my heritage.”

Recently, Canberra’s St John Paul II College commissioned work from her. It was giving her a big headache – what to paint?

She went to a NAIDOC week service and let the smoke drift over her during the smoking ceremony. That felt good but still the ‘headache’ persisted.

She could have reached for a pill but later in the car she reached for her worship music instead. Bingo! The idea came, fully formed and she knew what to paint.

That’s the way it works for Wendy. She can be back down by the river in Goodooga or in church in Brisbane. She closes her eyes and sits silently, meditating on the surroundings.

Entrusting Australia to Mary Help of Christians 23/24 May 2020

https://youtu.be/Q4sqiyfRIxA     Download the entrustment prayer here   CANBERRA, Australia - Catholic bishops in Australia will entrust the country to the care of Mary, ... Read More