Fr Frank shares with the Catholic Voice his Homily from the Requiem Mass at St Canice’s Parish, Elizabeth Bay on Monday, September 9 The photos of the beach holidays in the funeral booklet tell a story.  There were Gerard and Patricia with seven kids on the beach, all of them under ten years of age.  It’s become a family legend that Dad was often heard counting from the shore, ‘1,2,3,4,5,6.  O God, Trish, which one is missing?’  Mum intuitively knew which one it was.  No lives were ever lost.

Fifty years ago, Dad was spending considerable time in Fiji appearing in a long running case.  Mum took all seven of us to see him.  On the way home, we stopped over in Noumea.  Unfortunately, the French plane broke down.  So we were stranded there for a week.  One night we went out for dinner.  At the end of the meal, Mum ordered herself an ice cream with Grand Marnier.  I was dumbstruck.  I can remember it as if it were yesterday. I was 15 years old. Sure,  I had no idea what Grand Marnier was.  But that was not the cause of my bewilderment.  I had never seen my mother do something just for herself or order anything special just for her.

By 1974, Dad was often away having been appointed the main barrister for the Aborigines in the royal commission on Aboriginal land rights.  Knowing he would be away a lot on such a brief, he discussed the request with Mum.  She told him bluntly, ‘You’d better take it.’  When he phoned one night to say that he would be away longer than expected, Mum said, ‘Don’t worry, from now on, Frank and I will drink a bottle of 1968 Henschke Hill of Grace every night until you return.’  And we did.

Meanwhile, she continued caring for her brood of seven.  Mum had been orphaned when she was seven.  Her mother died when she was five, and her father two years later.  She and her little brothers Frank and Tom were spread to the four winds.  As a parent, Mum gave us everything she never had.  She knitted a new jumper for every child as well as Dad every winter.  She did elaborate tapestries and needlework as displayed on the vestment I wear today.  We never went to the doctor.  Presenting with any medical ailment, she would tell us, ‘You’ll live.’  Anne who later became a doctor like her mother claims that one day Mum operated on her knee with a sewing needle and without any anesthetic.

All this time, Mum was a voracious reader.  She loved reading good fiction and fine literature.   Particularly after Vatican II, she read lots of theology.  She was a great fan of the Jesuit paleontologist Pierre Teilhard de Chardin, consuming all his works as soon as they became available in English.  She loved Le Milieu Divin.  The weathered 1964 edition is there on her coffin.  In the Preface, de Chardin writes:

‘This book is … written for the waverers, both inside and outside; …for those who, instead of giving themselves wholly to the Church, either hesitate on its threshold or turn away in the hope of going beyond it.

‘As a result of changes which… have modified our empirically-based pictures of the world and hence the moral value of many of its elements, the “human religious ideal” inclines to stress certain tendencies and to express itself in terms which seem… no longer to coincide with the “Christian religious ideal”.

‘….[T]hose whose education or instinct leads them to listen primarily to the voices of the earth, have a certain fear that they may be false to themselves or diminish themselves if they simply follow the gospel path.

‘So the purpose of this essay….is to prove by a sort of tangible confirmation that this fear is unfounded, since the more traditional Christianity, expressed in Baptism, the Cross and the Eucharist, can be interpreted so as to embrace all that is best in the aspirations peculiar to our times.’

Mum’s intellectual curiosity was open to all advances in science and technology.  Her love of literature opened her to all the questions of the age.  Her education led her to be very attentive to the voices of the earth.  But she never had any fear that she might be false to herself or to the world or in any way diminished by simply following the gospel path.  Mind you, she often wondered what the bishops were up to.  Then again, she always found something admirable in each of the popes who had led her church during her adult life.  For Mum, Baptism, the Cross and the Eucharist were always enough to sustain her and to give her a sense of true north.  Even as she suffered physical and mental diminishment, she remained anchored in her faith and Catholic practice.

About a month ago, I visited her in Lulworth House when her dementia was well advanced.  I gave her a blessing.  She looked up at me with those glistening sharp eyes and asked, ‘Is this a sacrament?’  The night before she died, when she was doing little other than drawing the next breath, we celebrated mass at her bedside.  She rallied at the Lord’s prayer and was quite ecstatic at the sign of peace.  Just four hours before she breathed her last, we prayed the rosary and she made an unmistakable sign of the cross.  Her faith was deep and simple.  It went to the core of her being.

Literature fed her soul and spirit for decades.  When her youngest, Bernadette, became something of a literary critic, Dette marvelled that all the works of writers like Helen Garner and Gillian Mears were on Mum’s shelves.  And she’d read them.  Well after I had joined the Jesuit order, Mum told me that she had read Evelyn Waugh’s biography of the English Jesuit martyr Edmund Campion when she was in the hospital having me.  So I don’t know what was in that mother’s milk.

When her seven children were off her hands, she returned to medical practice caring for some of the neediest children in our country.  But she was ever attentive to her social responsibilities when Dad led the state and national associations of barristers and then became a judge.  I once got into trouble with a lawyer because I had said in a newspaper interview that my mother was more intelligent than my father.  The woman lawyer said to me, ‘You can’t say that.  Your father’s a High Court judge.’  I replied, ‘My father may be a High Court judge but everyone in our family knows that Mum is more intelligent than him.’  Late in Dad’s career, Mum was heard to say, ‘The thing I like least about the Australian legal profession is the more your husband is promoted, the more stupid they think you must be.’  Mum was always an acute judge of character.  There were many times when Dad would finally conclude that someone was less than optimal.  Mum would say, ‘Ged I told you that years ago when I first met them.’  Here at St Canice’s, celebrating their 60th wedding anniversary, a parishioner asked her, ‘Had you ever thought of divorcing him?’ Without hesitation, she answered, ‘Divorce, never; but murder, often.’

She served for years on the councils of Signa Dou College and the Australian National University.  She was always across the papers and never impressed by those, especially clerics or politicians, who had not done their homework.  She had unerring fundamental instincts about right and wrong, what was proper and improper. She was never much given to discussion of politics but she did confide on leaving the blue-ribbon seat of Ryan in Brisbane that she felt she’d been disenfranchised all her life.

Patricia’s soul is in the hands of God.  No torment now shall ever touch her.  We miss her.  But she is at peace.  Her hope is rich with immortality.  In life, particularly in her early years when orphaned and separated from her siblings, and in the years of her marriage when Dad was away so often, she was put to the test and proved worthy.  She was tested like gold in a furnace.  In the culmination of her life, she shone out, just as sparks run through the stubble.  She trusted in her God and she came to understand the truth in its fulness.  Being faithful, she lived her life to the end in love with her God, confident that grace and mercy awaited her. The vestment design and altar painting are by Miriam Rose Ungunmerr from Nauiyu Nambiyu, Daly River NT and Patricia created the tapestry

Patricia is indeed happy in the Spirit resting forever after her earthly labours of which we her family are the firstfruits, generation to generation.  One of my fondest memories of her last months was early last November.  I wheeled her in her wheelchair down to Rushcutters Park.  It was a glorious late spring day.  The water was glistening.  The sky was blue.  The jacarandas were in full bloom.  I bought her a coffee.  When she’d finished, I asked, ‘How was the coffee?’ She replied, ‘Mediocre’.  She then smiled, her eyes lit up, she lifted her hands, and looked around, exclaiming, ‘But this!’  There she was in the autumn of her life surrounded by the beauty of nature in company with one of her own.  She counted herself abundantly blessed.  And she was.

In everything that mattered, Mum was always dressed for action with her lamps lit.  And she knew what mattered.  Even when confronted with physical and mental impairment in her last years, it mattered not because she was standing ready. The Lord has always been her shepherd.  Even in the midst of the greatest challenges, her soul was restored again.  Even when walking in death’s dark vale with the loss of both parents by the time she was seven years old, she learnt not to fear ill.  In time, her cup overflowed and she furnished a table at which husband, seven children and all comers could be accommodated.  Goodness and mercy followed her wherever she went.  We are smitten by her departing this life but we rejoice that her dwelling place is now God’s house.  She’s there, saying to us: ‘As it should be.’  May she continue to inspire and bless us, particularly those who are her children, her grandchildren, her great-grandchildren and all who share life with them. 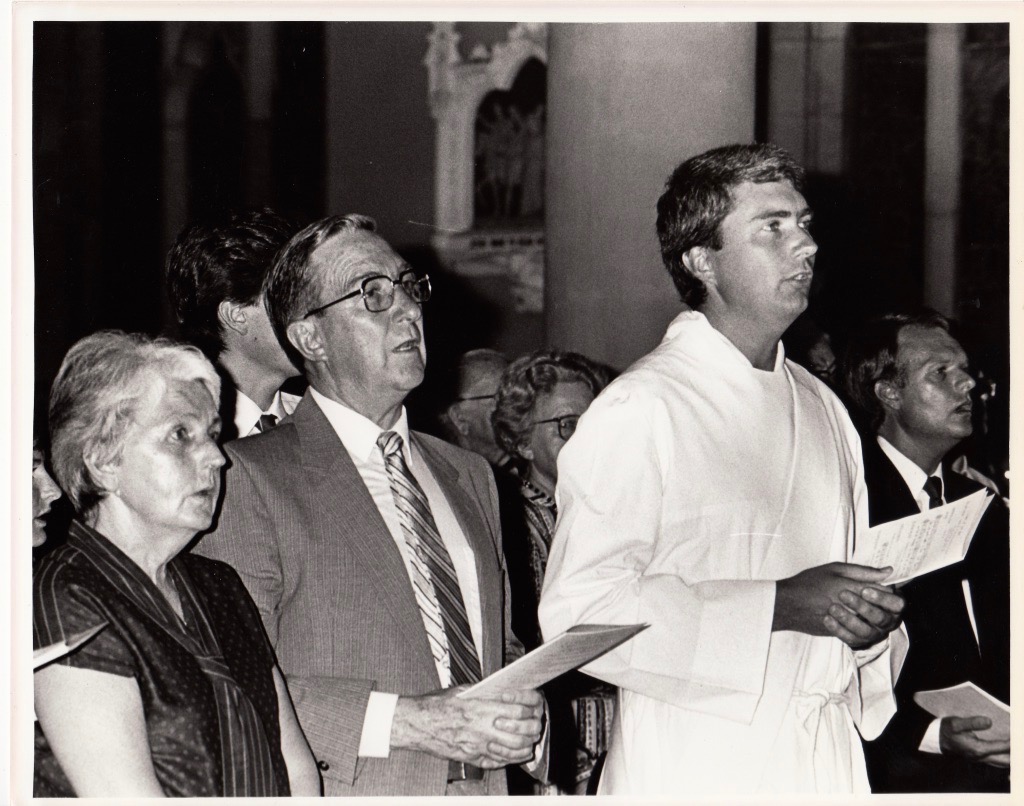 Pope Francis has declared that this coming October is Extraordinary Mission Month and many activities and events are being planned for the Archdiocese. A ... Read More

NEWER POSTMinistry to the Newly Married a ‘hidden treasure’
OLDER POSTSocial media: a minefield and miracle