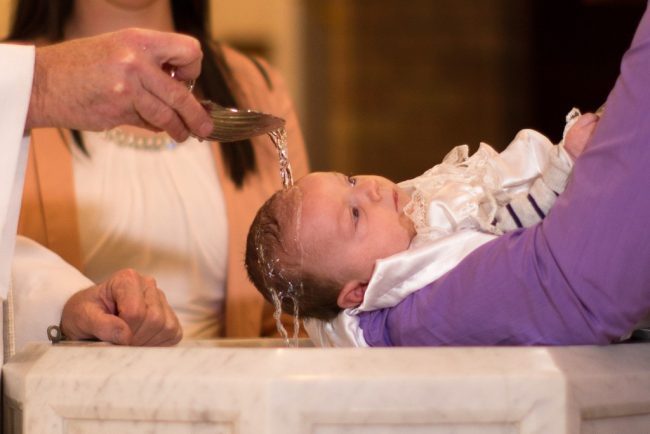 On April 29, 1951, Father Thomas Love, SJ, baptized me in the Church of Sts. Philip and James, near Johns Hopkins University in Baltimore. Family legend has it that I raised such a furor during the proceedings that my cousin Judy hid in a confessional. There are pictures of the christening, and a few years ago I found a lovely letter that Father Love (whom I never met) wrote me shortly afterwards. But I cannot say that I took the date of my baptism seriously until I was nudged into greater baptismal awareness in the 1980s.

The first nudge involved working with evangelical Protestants, who typically identified themselves to strangers at a meeting by saying, “I’m [so-and-so] and I was born again on [such-and-such a date].” That made me think about when, precisely, I had been born again; so April 29 began to loom larger in my mental calendar of Important Dates. The second nudge came from writing about John Paul II. During his pilgrimage to Poland in June 1979, the Pope went straight to the baptistry of his former parish church in Wadowice, knelt, and kissed the baptismal font. Why? Because, I realized, he knew that the day of his baptism was the most important day of his life: for it was the day that made his life in Christ, which he knew to be the deepest meaning of his life, possible.

Ever since, I’ve been urging fellow-Catholics to mark the day of their baptism. So let me urge you again: make this time of plague and quarantine the occasion to dig the “Catholic paper” out of your records, find your baptismal certificate, and learn the date of your baptism. And then, with appropriate celebration, ponder just what happened to you that day.

As the Catholic Church has understood it for two millennia, baptism is far, far more than a welcoming ritual: baptism effects a fundamental change in who we are, what we can “see,” and what we must do.

Being born again by water and the Holy Spirit in baptism, we become far more than [fill in the name] of a certain family, address, and nationality. We become living cells in the Mystical Body of Christ: members of the New Israel, the beloved community of the New Covenant, destined for eternal life at the Throne of Grace where the saints celebrate what the Book of Revelation calls the Wedding Feast of the Lamb in the New Jerusalem (Revelation 19:7, 21:2). We become the people in whom humanity’s greatest hopes, incapable of fulfillment by our own devices, will be realized.

Having been cleansed in the waters of baptism and instructed in the truths of faith, we can “see” the wonders God has done in history more clearly. Thus baptism, in a certain sense, sacramentally recreates the Easter experience of Mary Magdalene in the 20th chapter of John’s gospel. At first, Mary thinks the Risen Lord is a gardener. Then, after he calls her by name, she clings to his feet; but that is to cling to the past, to the Jesus who was, and so she is told, “Do not hold me” (John 20:17). Finally, Mary begins to comprehend that the Jesus she once knew, the Jesus beneath whose cross she stood, had been raised to an entirely new dimension of human existence – a life no longer shadowed by death, a life beyond death. And so she became the first messenger of the Gospel as she made a radical act of faith before the other friends of Jesus: “I have seen the Lord” (John 20:18).

Which brings us to what we, the baptized, must do.

In baptism, we die with Christ, the Risen Lord who lives in the presence of God and amongst his brothers and sisters in the Church. That Jesus is present both in eternity and in history means that his brethren can live – in an anticipatory way, here and now – in the eternity of God. That is a great gift. To be worthy of it means to share it.

So we, the baptized, have also been commissioned. On the day of our baptism, each one of us was given a commission as a missionary disciple. Each of us heard (on our own, as adults, or through our parents and grandparents, if we were infants or children) the Great Commission of Matthew 28:19: “Go…and make disciples of all nations.” Everyone in the Church is a missionary; everywhere we go is mission territory.

To live that is to own the truth of our baptism in full.

George Weigel is a Catholic American author, political analyst, and social activist. He currently serves as a Distinguished Senior Fellow of the Ethics and Public Policy Center. Weigel was the Founding President of the James Madison Foundation APATZINGAN, MEXICO: A clash between drug trafficking cartels last week left a church pillaged and full of bullet holes in a village in Mexico. Read More